I wish that someone told me how difficult breastfeeding was going to be at the beginning.  I don’t think I would have been so discouraged with the whole process if I had better understanding of it before I started.  Maybe it was because I had never really seen what breastfeeding looked like until I was in the throws of it myself.  I knew it was something I was going to do and  that it was best for my babies.  But I was the youngest child, so I didn’t get to watch my mother nurse a baby.  And there are not many images of nursing mothers in the media.  Until recently, nursing in public was not socially accepted so I didn’t see it out and about.  I didn’t realize it at the time, but the only qualifications I had to be a breast feeder, was the fact that I had breasts and babies in my belly.

I just thought that because I am a woman, the act of nursing was just going to come naturally.  But I had never seen up close and personal what breastfeeding looked like.  I had never actually watched a baby latch on, or drink from a breast up close.  How was I supposed to know how to do this?  I researched everything about babies and birthing, I didn’t realize I would actually have to learn how to nurse my baby. 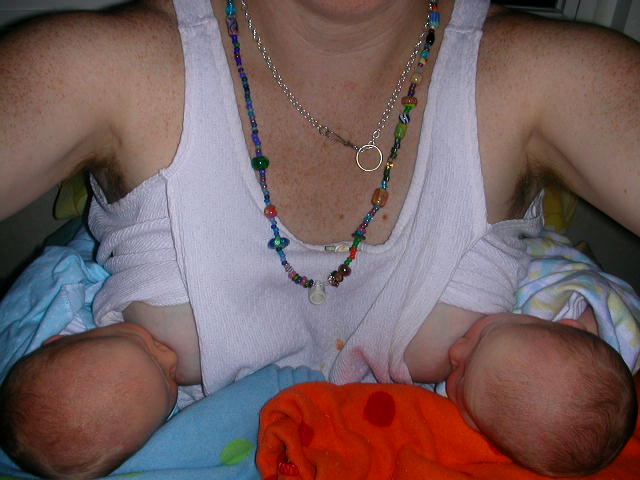 Since my first born were twins, I soon realized that I was in way over my head.  I had sore nipples. I was completely obsessed with the amount of milk they were each getting.  And to top it all off, I had no idea what a proper  latch looked like.  Luckily, I had the help of my midwives, a lactation consultant from the hospital, and I also contacted the Le Leche League.  We learned quickly how to work as a team, and within a few weeks we were a feeding machine.  My girls nursed exclusively without supplementation until they started solids.  However, it was hard getting to that point.  My daughters continued to nurse until they were two.

The Newman Breastfeeding Clinic and Institute has a wonderful group of videos that demonstrate productive and non-productive nursing, latching on, and many different styles of nursing.  I wish I had seen these videos back when I needed help getting started with breastfeeding.  These videos would have helped me a lot.

If you are having troubles nursing, don’t give up.  I know first hand how hard it can be, but you can do it.  If anyone tells you to supplement, get a second opinion.  And keep trying.  Nursing is not easy at first for everyone.  It does and will get better and better.