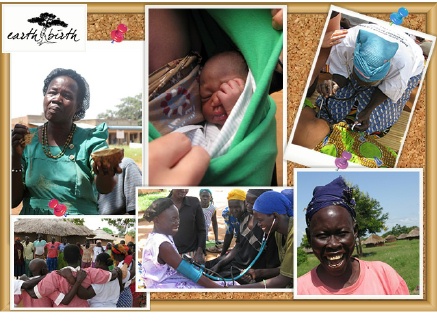 Earth Birth is an International Women’s Health Collective run by midwives to foster a movement that encourages and promotes safe and peaceful birth as an act of social justice and community healing. We approach women’s health care through a methodology that is both community centered and internationally connected. We build clinics and community centers that are sustained by Traditional Birth Attendants and Educators. Our birthing centers are not only clinics but community sustained spaces for refuge, learning and the sharing of stories. Our goals include lowered maternal and infant mortality rates, lowered mother to child HIV transmission, access to supplies, access to trauma counseling, the ability to articulate ones story and the facilitation of positive and empowered childbirth experiences.

Our initial focus is on Northern Uganda where over two million people have been displaced, many of whom still live in internally displaced persons camps and rely heavily on foreign aid for food, housing and health care. In the aftermath of the 23 year war, foreign aid has been pulled out, leaving gaps in resources that the community of displaced persons struggle to fill. Women have been used as tools of war, as sex slaves for the army, often giving birth to many babies during and after abduction. The need for trained health professionals who are invested in and know the community and its resources has never been greater. Earth Birth works with traditional birth attendants to create culturally competent clinics that are based on best practices and locally sustainable resources. Currently, we have a team of thirty traditional birth attendants and 20 acres outside of Atiak, an IDP camp near the border of Sudan.

We have just finished building an eco-sustainable, solar powered clinic and community space. Despite a government push towards hospital births, it is estimated that 80% of the births in the region are taking place in the IDP camps with traditional birth attendants, which makes them critical health care providers and crucial to community restoration efforts. In response to this, the midwives at Earth Birth work with traditional birth attendants to create culturally competent, government recognized clinics that are based on best practices and locally sustainable resources. The birth clinic in Atiak is truly the first of its kind. Holistic and restorative reproductive care is essential to a future of peace in Uganda.

We view childbirth as an act of social change. Safe and peaceful birth experiences are necessary for generations that are to live without war.

We are a community of health care professionals, activists and academics. We stand in solidarity with women who have been victims of war, who have been silenced, abused, or shunned. We move with and support those who have dedicated their lives to peace and justice, to creation in the face of destruction, to fearless resilience.

To purchase supplies directly for this organization – you can visit their wish list here.

Be sure to enter this organizations address into the “Ship To” portion at check out.

Address to enter at checkout for Ship To: