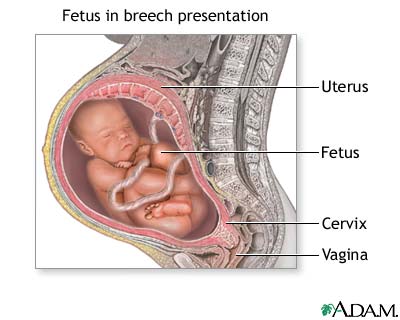 Part of the reason I was risked out of the homebirth of my first pregnancy was because one of my twins was breech and twisted in the umbilical cord.  When we went in to see the OB he told us that if I went home to wait for natural labor I would end up in the emergency room and I would get doctor du jour.  I would or would not be allowed to try a vaginal delivery with twin A, but twin B would most likely need to be delivered by cesarean.  Our reasoning for going in to have the cesarean that afternoon was so I would not have to recover from vaginal and cesarean delivery and have twins to nurse and care for all at once.  This was all a major diversion from any birth plan I had ever imagined.

The OB told us that there are so few doctors willing to even attempt a breech delivery that the art of breech delivery is dying out.  None of the young doctors are getting to see breech delivery so they are reluctant to do them as well.   Not all breech babies need to be delivered cesarean.  Go here to read 17 ways to turn your breech baby.

The medical professional’s reluctance to deliver the breech baby is well founded. Based upon their experience, this delivery is fraught with danger. How can we expect a physician to handle the unusual delivery when he has not been trained to allow the normal delivery?

Indeed, complications may ensue in the process of labor and delivery, and in no way do I wish to disallow them. Yet I believe that many of these complications may be avoided with competent knowledge of the mechanics of the breech labor and appropriate delivery technique.

Other than these obvious physiological reasons for breech presentation, I believe the baby chooses the position that is most comfortable and that will guard him against oxygen deprivation. For example, I have delivered three breech babies who had complete knots in the cord. If they had been born vertex, they may have suffered hypoxia or been stillborn. Also, it is not unusual to find that the placenta, though not a previa, is somewhat low-lying (most often delivering Duncan), which leads me to wonder if the baby assumes the breech position to avoid the greater weight of his head pressing against the placental site, thereby reducing oxygen flow.

When considering a vaginal breech delivery, it is imperative that the mother is emotionally stable, has a high degree of confidence in her body as well as in her midwife, and has a high degree of motivation. In attempting breech delivery, excellent communication and cooperation between the mother and her birth attendant are crucial. Allow extra time for a careful discussion with the parents so they will know what to expect.