My birth plan was thrown out the window as soon as we were risked out of home birth at 39 weeks.  I thought we had everything in place.  Even though we found out we were having twins when I was 37 weeks, our midwife assisted  home water birth was still the plan.  Until……I just never went into labor and the second ultrasound revealed twin b was breech and cord wrapped.  At 39 weeks and no signs of labor plus a heatwave we were having, we needed to make some decisions.

We were offered two choices.  The first was to go home and wait for labor to start(it was 106 degrees that day), go to the emergency room and get doctor dujour.  Whoever was working that day may or may not let me labor and attempt vaginal delivery.  Most likley twin b was going to be a cesarean delivery.   The second choice was to go strait to the hospital and have a cesarean with the on call doctor who my midwife was familiar with.

Not having to recover from a vaginal and a cesarean delivery with twins to nurse and care for won out. We called our families and headed over to the air conditioned hospital.  I just knew I was making the right choice for everyone involved babies included.  I was dissapointed that my birth plan was not fulfilled, but no matter the circumstances I was overjoyed the moment my babies were out.  There is no better moment in life. 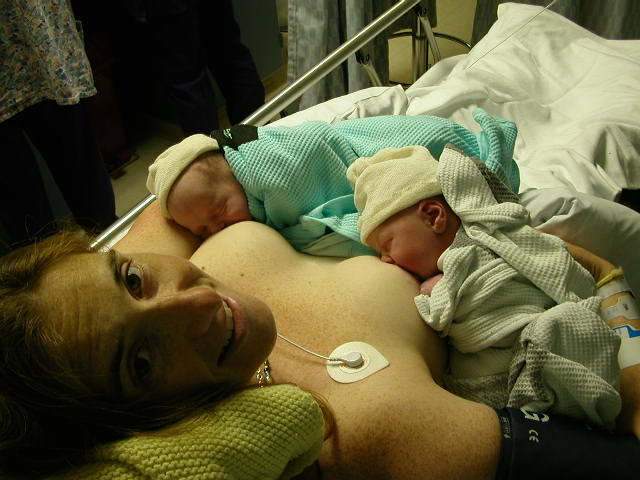 The lesson learned was that you can have the most comprehensive birth plan on the books, but you need to be willing to go with the flow.  I am appalled at the high cesarean rate in this country and never in my wildest dreams imagined I would head down that road, but when life happened and I hopped in that car I was glad that the mechanics were ready at the shop.

Three years later I had the opportunity to have a pregnancy that ended the way I envisioned.  I had the midwife assisted water home birth.  Only this time it was a HBAC.  Home birth after cesarean.  This experience was so empowering, but no more special than the first.