I got an e-mail this morning from a customer of mine from before I closed my natural living shop to tend to my three children. This is what she wrote:

“Hopefully you don’t mind but I have to ask you a question, I have been giving (my daughter) Hyland’s Teething Tablets and they are working great…during a conversation with another mother she said her doctor told her to stay away from them because of the Belladonna in them…in researching the internet, I have read that yes Belladonna is harmful and that it is not.”

She had been using Hyland’s Teething Tablets for her infant because I told her they were safe. There is a reason why if you google the word “Belladonna” you will find two very different stories. We’re talking about two very different things.

Belladonna is one of the most toxic plants that exist in the western hemisphere.  That’s the truth of the matter.

The thing that proves that that particular pediatrician knows absolutely nothing about homeopathy (and consequently the safety of Hyland’s Teething Tablets) is that he declared that Belladonna is listed as an ingredient on the label. That’s not true.

What IS listed on the label is: Belladonna 3X hpus. 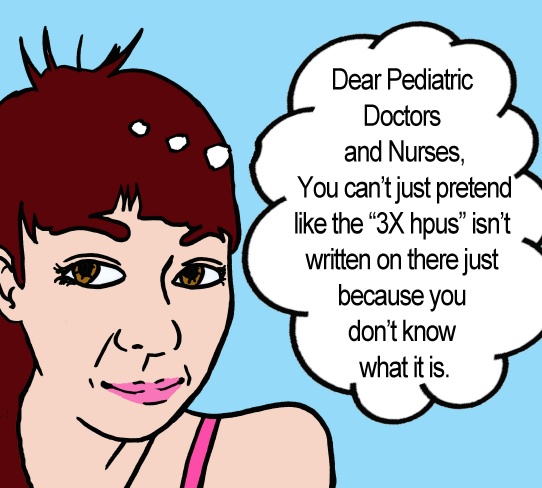 Belladonna is not the same thing as Belladonna 3X hpus.

Very, very simplified, I like to translate “Belladonna 3X hpus” as:

Apparently to save room on that tiny little bottle, instead of my translation, they just write “3X hpus.”

When I say undetectable, I don’t mean it has “trace amounts.” I mean that if a chemist were to sit down and examine a pellet from a Hyland’s Teething Tablets bottle, there will be basically no Belladonna in it. It’s less than trace amounts. Actually, what a chemist will tell you is that it’s pretty much a sugar pill.

Homeopathy offers a much safer scenario than the “trace amounts” or “small amounts” of aluminum, formaldehyde, mercury, msg, and antibiotics that are actually very detectable in the vaccines that our pediatricians have absolutely NO problems administering to our children.

Pediatricians used to suggest Tylenol or Motrin, but with all of the recalls lately on those items, most parents are saying “No thank you.” to those medicines anyway.

When you say your infant is teething, the pediatricians usually recommend that you use Baby Orajel. Since they’re so concerned about the Belladonna that many pediatric doctors and nurses think is in the teething tablets, I wouldn’t mind getting a commentary from a pediatrician on the safety of some of the MAIN and very detectable ingredients in Baby Orajel.

The specific MAIN ingredients in Baby Orajel that I’d like a pediatricians honest evaluation on are: FD&C red #40 (which has been banned in Europe as a food coloring because of its toxicity,) polyethylene glycol (which is a caustic used to dissolve grease in cleaning agents,) sodium saccharin (which is listed as a possible carcinogen and dramatically alters a person’s pH,) sorbitol (which can cause chronic diarrhea) and benzocaine (which may cause a rare, but serious condition where the amount of oxygen that can be carried through the blood stream is greatly reduced called methemoglobinemia.)