I was on the lawn at my parents’ house for all of a minute and thirty seconds trying to refill a squirt gun for my son, when I was attacked by mosquitoes. It was getting to be closer to dusk, we were right by a pond. But the attacks were unreal! By the time I went inside, I had welts all over. Of course, this was the one day out of a hundred that I chose to wear a sundress rather than jeans, so, these bites were up and down my legs! I was so nervous once bitten because my boys and my little one had been outside playing for some time.

Of course, I had forgotten my natural bug repellent which is so safe, you can even use on babies.  Ugh! I’m scratching myself as I type just thinking about it.

Maybe bug bites aren’t a big deal for you, but they are for me. My family is highly sensitive to bug bites. Our skin welts up. Then, after the welt, the bite remains for about a week looking like some kind of festering sore the size of a quarter.

My dad offered us OFF with DEET, but much to my children’s dismay, I politely declined (while shuddering inside at how easy it is for most of America to slather poison on their skin) and he was very respectful of my decision.  Instead of accepting the OFF, I ended the outdoor festivities and brought forth the “Supremacy of Mom: the biggest party pooper on the planet.” They weren’t happy that they had to come inside… They wanted the DEET.

As an aside, let’s talk about DEET for a second. It’s really good at killing bugs.  It actually goes in and inhibits the activity of an important central nervous system enzyme in insects… oh yeah and in mammals too, so be careful when you have your DEET around mammals that you love, like your dog or your horse… you know, ANY OTHER MAMMALS that you can think of that you love.  DEET is also an effective solvent.  So, some of its uses around your house would be if you needed something to dissolve plastics, synthetic fabrics, varnished surfaces or the likes. So, it’s definitely really handy to have around, but I’d seriously consider childproofing your DEET supply cabinet.

Anyway, so I was pretty mad that I forgot to bring my natural bug repellent.  I especially prefer brands that contain catnip instead of citronella, because catnip contains a substance called nepetalactone, which incidentally (since we were just talking about it) is ten times more effective at repelling bugs than DEET and doesn’t smell overbearing like citronella. The only downside of the natural mosquito spray is that you have to reapply a small amount every hour or two to keep it working as effectively.

It was an unpopular decision, but here I show you the scales that were being weighed in my head as I considered spraying OFF with DEET onto my children’s bodies. We have the facts about catnip as a bug repellent on the left and the facts about DEET on the right. 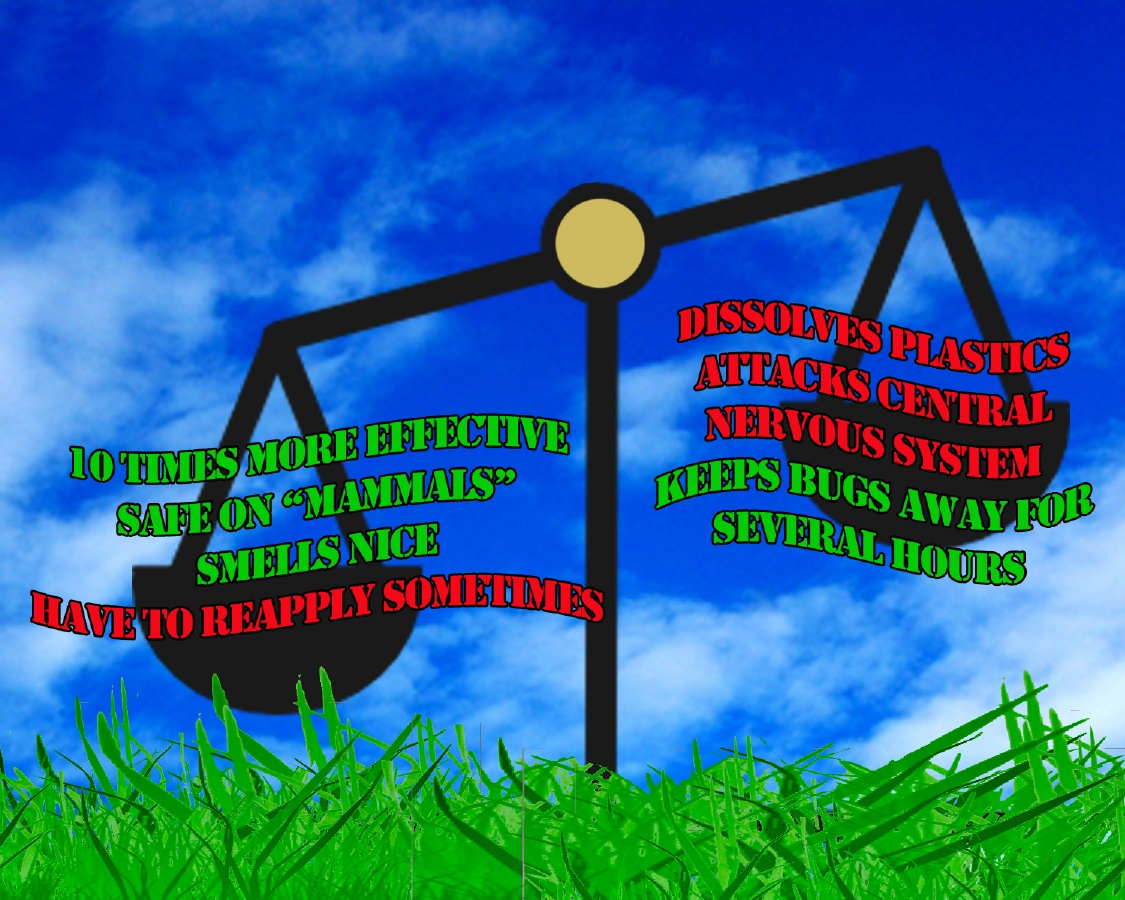