What a surprise I had this morning when I opened my e-mail.  I had a reply from no other than Barbara Katz Rothman.  I am still buzzing from the excitement.

Recently I have been sending out requests for midwives,birth educators, and birth enthusiasts to answer some questions.  Today we are lucky to have a response from such an esteemed writer and educator.

What is your favorite waterbirth story?

I don’t have a favorite ‘waterbirth’ story — water can be lovely and restorative and helpful for labors, but I’ve seen too many people turn ‘waterbirth’ into a goal, or a plan, as if the water itself mattered.  It’s the birth that matters, and the woman should have access to whatever makes her comfortable and birth well.  If a tub of water might help, it’s nice to have around.  But once it’s there, it’s often like some magnet — you spent money on it, put in time installing it, have it there and feel you ought to use it.  It is,  in its own ironic silly way,  much the way that so many medical technologies work.  Once they are there and so convenient to use, people feel obligated to use them.

What is your favorite homebirth story?

Home birth is not about the place — it’s about the control and comfort of the woman.  For most American woman, home is the perfect place to give birth, the place she will be most ‘at home’  and can have real comfort and control.  But not always — take an extreme example of a woman in an abusive relationship.  Or any woman who doesn’t feel like she has power in her own home –many cultures have moved the birthing woman to the midwife’s home, the equivalent of a ‘birth center’ run by midwives, because a woman in her own home might have to bow to the wishes of her husband or her mother-in-law, might have to show restraint in front of her children or others in her home.  So when I think of ‘homebirth’ I think of a place where a woman is truly at home, truly in charge of her setting.  I’d like her mothering to take place with that level of control too — I want every woman to be ‘king of her castle,’ ruler of her own space, to birth, to mother, to live.

My favorite home birth story is, as well it should be, my own two home births.  I’ve written about them — they formed the ‘prologue’ and ‘epilogue’ to my first book on birth, IN LABOR, and continue to influence my thinking about birth right through to my most recent book, with Wendy Simonds, updating that into LABORING ON.  Birth is so powerful an experience, that doing it in a way that lets you own it, do it, not have it done to you, is inevitably going to make women feel powerful.  I took that power and let it shape my work ever since.. 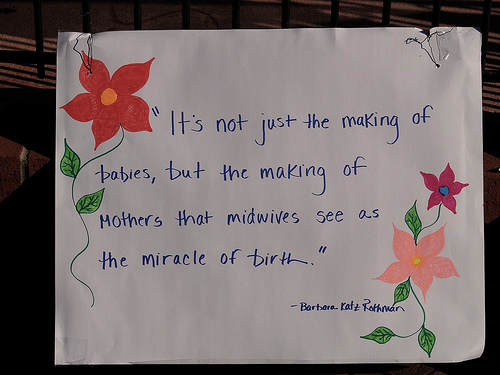 Barbara Katz Rothman, Ph.D.(NYU, 1979) is Professor of Sociology at the City University of New York and the author of numerous books. Her work is interdisciplinary and international; its scope encompasses medical sociology, childbirth and midwifery issues, bioethics, race, disability, and the sociology of knowledge.