For those of you just starting out in the world of cloth, I have to explain a very strange phenomenon that happens with Fuzzi Bunz pocket style cloth diapers.

Every once in awhile, Fuzzi Bunz will come out with a featured color of their awesome pocket diapers that is available for a limited time only. Right now, Fuzzi Bunz is featuring the Choco Truffle.

You will want to buy these diapers. 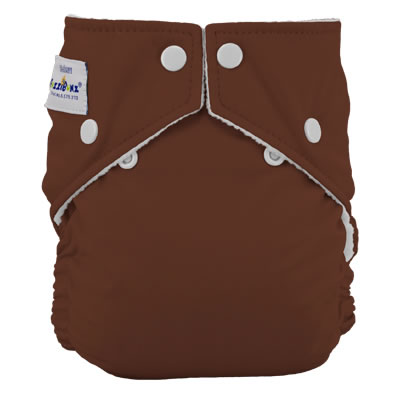 Think of it as an investment. Instead of buying a bunch of the standard colors that you think are really swell, try getting as many of you can of the limited edition colors.

Fuzzi Bunz are highly superior at standing the test of time compared to other brands of cloth diapers. Fuzzi Bunz have far outlasted any of the other diapers I’ve ever purchased. Fuzzi Bunz easily live through a few children because of their fantastic quality and commitment from the manufacturer.

What this means for you however is that, since Fuzzi Bunz have a strong reputation for quality, they have a very strong resale value compared to other cloth diapers.  Let’s say you buy one for around twenty bucks. After you’ve used it every day for two years, chances are really good that when you’re done with your Fuzzi Bunz, you could turn around and sell them for $15 a piece on Facebook or one of the many diapering sites.

Here’s the odd phenomenon that I mentioned before though: People are obsessed with Fuzzi Bunz limited edition colors. I had an army green diaper that I sold that had been used for years and it sold (without an insert) for exactly what new Fuzzi Bunz retailed at (with an insert.) Not only did I save money by not using disposables, I actually made money on that diaper! The same thing happened with a dark navy Fuzzi Bunz I had… and my burgundy Fuzzi Bunz.

I have a strategy as to which diapers I project will have the highest resale value. I know, for example that Fuzzi Bunz also is carrying the Kumquat diaper as a featured diaper right now. It is however very close, if not the same as the old orange diapers they used to carry. I don’t think it will have nearly as much resale value as the Choco Truffle. Not only has an orange Fuzzi Bunz been around for awhile, but Tereson, the inventor of Fuzzi Bunz is quoted on her page as saying that Kumquat is probably her favorite color of Fuzzi Bunz. Given that, it seems unlikely that the orange will ever disappear for very long.

Note: If you are interested in selling your used diapers when you’re done with them, keep in mind, Fuzzi Bunz connoisseurs know their stuff. You will want to always wash them according to their care instructions. Keep them out of the dryer. Never use bleach. Never use fabric softener. Use only the recommended detergents. Fuzzi Bunz rarely have problems except ones that are caused by not following the care instructions, and believe me, a Fuzzi Bunz fanatic will be able to tell.