I’m certainly not suggesting you refrain from peeing on sticks when you’re trying to conceive. Chances are if you’ve made it into the Everything Birth’s Website far enough to read this blog, you’ve peed on a stick. Let’s be real though, chances are, you’ve peed on several sticks… maybe even several sticks this month alone.  You’ve probably even bought sticks to pee on in secret, so that the other financial contributors in your family don’t realize you’re dwindling the family’s cash reserve. At around $15 for a pack of two, you’ve got to ask yourself, by the time you get that positive pregnancy test result, how on earth will you be able to afford the baby?

I’m not passing judgment. I’ve been there.  I’ve spent hundreds and hundreds of dollars on pregnancy tests over the course of my fertile years. I’ve pulled the test apart to get a closer look at the line. I’ve Googled: Pregnancy Test Evaporation Line Photos. I’ve posted pictured of possible positive pregnancy tests for peer evaluation on pregnancy forums.

It works both ways though, I’ve tested while trying to conceive, but I’ve tested for no good reason too. One morning I had a dream that a pregnancy test I had in a drawer came up positive, just to prove it wrong, I peed on it that morning and nearly fainted when it came up positive. Then, in disbelief, I peed on four more that day, just to be sure. I had so many positive pregnancy tests, at that point, I made a “pregnancy test person” to creatively present the news to Ayla’s daddy. 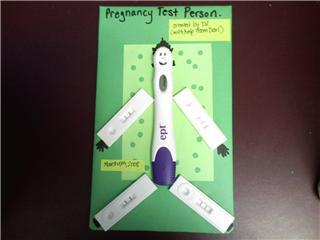 To my knowledge, there is no way to avoid the constant urge to pee on a stick while trying to conceive (or when trying to comprehend one’s own pregnancy for that matter.) Thankfully, with a clear understanding of this overwhelming obsession, we can control its impact on our bank accounts. Everything birth offers pregnancy tests in bulk. In fact, you can purchase bulk pregnancy tests from Everything Birth at less than two dollars a stick.

So, there you have it: the truth is out, I am a stick peeing enabler.