I’ve mentioned before that my stepson has Fetal Alcohol Spectrum Disorder. This week, his school completed his IEP which details his strengths and weaknesses and coordinates a plan of action for his best educational scenario. At his IEP, repeatedly, the specialists made mention that his biggest weakness was an immature and damaged vestibular system.

The vestibular system is the sensory system in a person’s brain that provides awareness of balance, spatial awareness, and movement. My step-son’s vestibular immaturity leads to his nervous system being overloaded and when it is, he seeks out movement such as swinging.  In normal babies, we see this need sought after when they seem to only be put to sleep by a baby swing.  In reality, the swinging motion only soothes the vestibular system; it does nothing to help mature it. The way to mature, rather than just sooth, a vestibular system is to be carried by an adult.  When an adult carries a baby, the baby’s own vestibular system learns to mirror the adult’s mature vestibular system by experiencing “mature movements.”  You see, there is a natural rhythm of movement that is inherently human that no baby swing, bouncer or stroller can replicate.

This is why baby wearing is so crucial. The lack of baby wearing keeps a baby’s vestibular system immature and because it is so intertwined with other bodily systems, not baby wearing leads to digestive problems, nervous problems, panic attacks, poor sleeping habits, teeth grinding, colic, and reflux, just to name a few of the issues.

Now, my step son’s vestibular system is damaged, not just immature. It was damaged by his birth mother’s alcohol consumption while she was pregnant with him. There are studies that seem to indicate that brains can heal though. I know it’s not common to believe it, (brain damage is permanent is the common belief) but there seems to be some evidence that has been arising that offers me hope.

You see where I’m heading with this right?

Dr. Sears, perhaps the most well recognized and renowned pediatrician who favors natural parenting methods, has a question and answer area online. So, I asked.

Would “wearing” my five year old in a baby carrier cause any emotional attachment issues? Could I harm him in a way that would create a co-dependence by baby wearing him at such a late age?  His answer was no.  He also went on to say that in 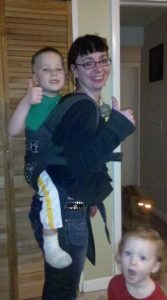 fact, it was actually possible that wearing my kindergartener could actually heal his vestibular system.

For the first time, I have hope. Not just that he will do “the best he can with his life,” but that he may heal.

I share this story to stress the importance of babywearing, but also to offer hope to mothers of FAS children. I don’t know if it will work, but hope isn’t about “knowing.”  It’s about having enough potential to take a step down a new path. I will keep you posted.