Men today do wear babies. I see it fairly regularly in public, and even more regularly 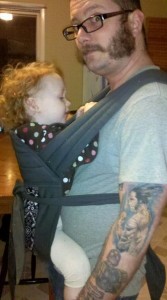 in my own circle. It’s a good thing.  There are solid colors or more masculine prints of baby carriers out there if that will encourage a man to wear the baby they adore.

Sometimes though, I have to tell you, men actually enjoy wearing the pretty prints in public. I suppose less secure men may be worried that it makes them look like cross-dressers, but the reality of it is it makes men look exponentially more awesome than they ever could hope to achieve on their own. When I used to have my natural parenting store, men would come in with their wives and they would be wearing their babies in the most girly of carriers.

I used to tell them I was proud of their ability to overcome the flowered prints and lavender colors. The men would point out though that they actually enjoyed the extra attention it brought them. No one slandered them publicly; on the contrary, women they didn’t even know would walk up to them and comment on how adorable they were with their babies.

Let’s face it, men like to be complimented. Men like to be complimented by women they don’t know too. At a time when men are often forced into the sidelines, as moms and new babies get all of the attention and adoration, I think it’s good for them. Babywearing, even with the most girly of carriers, allow dad’s to be in the spotlight for once, and if they are man enough to wear a gorgeous carrier, I say they deserve the extra attention!

For more info on baby wearing, see The Science of Babywearing.