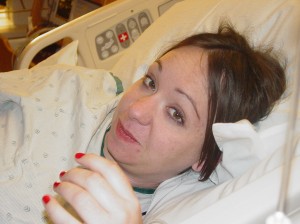 When I had my son Noah, there were several surprises that no one warned me about that I would have felt much more comfortable knowing ahead of time. For example, no one told me that when I got home with my new baby and looked in the mirror, I would look almost as pregnant as I did with the baby inside of my belly. I thought for sure something was wrong. I had read that nursing my baby would shrink my uterus, but I never gave it much thought. I didn’t realize just how much actual space my uterus was taking up inside of me.

No one told me that if I had an IV, my face and hands would swell up and I would look far more chubby during the first day or so after delivery than I did before delivery.

No one told me that my afterbirth bleeding would look like a murder scene. No one explained that sometimes it pools around in a woman’s uterus until she moves just the right way, resulting in a massive gush of blood all over the floor. No one told me to buy some Depends.

No one told me that they wouldn’t let me go home from the hospital until after I pooped, had they, I would have been eating more fiber and drinking more water when I could see labor was near.

No one told me that cloth pads would be so much softer on my traumatized area than disposable pads. I never even thought to think about it.

No one told me that I wouldn’t be able to sit right for a few days after delivery. No one warned me I should buy one of those donut shaped tush cushions for the car ride home if I didn’t want to have to sit on my hands.

No one mentioned that there would be people taking pictures of me right after the baby was born. Had they, I would have been more careful to remember my good shampoo, my cute jammies and my make-up. It never occurred to me. I knew there’d be pictures of my baby, but now, for all eternity, there are pictures of me looking my very worst on one of my very happiest days ever.

No one showed me the circumcision video. No one explained what was actually going to happen to my son when they whisked him away in the middle of the night.

No one told me to bring extra hair ties to my labor. No one explained that one second I would need one and the next, I would throw it away from my body in a fit of irritation, only to want it back a couple of seconds later.

No one told me I could tell visitors they couldn’t come and talk to me during labor. No one asked me my preferences.

No one ever explained I didn’t have to push until I felt the urge. No one explained that the urge would be so overwhelming I could not miss it, and no one warned me the trauma pushing before that time would inflict on my vagina.

No one told me not to look at the clock. No one explained that looking at a clock flips a switch in women’s brains that makes their labor not progress.

No one told me that if I delivered my baby at a hospital, I could and should order my breakfast a head of time because if I didn’t, Dietary wouldn’t interrupt my delivery to ask my preferences; they would just send me Canadian bacon, coffee and boxed cereal with whole milk. (Only the healthiest foods for a new mom! )

What did no one tell you?

Come on ladies, let’s help these newbies out. Let’s make their deliveries be filled with fewer surprises.

What did no one tell you?