Thankfully, I have access to an on-the-fly babysitter. Her name is Grandma, or Nana, if it’s easier. I would have been in a really difficult position the other day if she wasn’t there for me.  Let me back it up for a second.

You see, I used to own a bunch of baby carriers. I used to get samples of them from when I owned Mama Gaia’s. A couple of my carriers got loaned out. A couple got sold. Now, only one remains. It’s a mei tai style carrier, with a really cool print.

So, the other day I was going to a funeral and had planned to take the baby with me. Ayla does really well if she’s in the carrier. I wasn’t the least bit worried about her disturbing the other people that would be there. It may seem weird, but I try to expose my children to social settings like funerals early so that they are better equipped to deal with these hard tasks as they get older. Someday, someone close to them will die, and I don’t want them to have to deal with their fears over what a funeral is like at the same time they deal with their grief.

At any rate, just as I was getting ready to go, I suddenly realized that the trendy printed design on my last remaining baby carrier was highly inappropriate for a funeral.

So, I’ll just show you. Scroll down to the bottom of the blog to see the print on my baby carrier that I was about to wear to a funeral.  Then, come back up and continue reading.

(Paused, while you scroll down.)

So, you see why I had to call Nana, right?

At any rate, the reason I’m sharing this with you is because most of you don’t have access to endless baby carriers like I used to. Most of you will just own one, like I do now.  I just wanted to point out, that when shopping for a baby carrier all over the internet, you might want to consider the myriad of places you will be going over the years in that new baby carrier.

May my “almost-faux-pas” stand to be a lesson to us all. 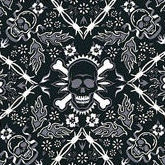