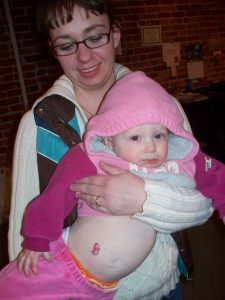 Apparently not though, because I got some angry private messages that day. I still can’t wrap my brain around it, but a few people thought that this was a permanent tattoo.  You know, like the kind that are done with needles and ink.

I still chuckle thinking of it.

I mean OF COURSE, I’m not going to tattoo my child. Right? That would be barbaric. And permanent.

And what right would I have to permanently modify my child’s body?! Right?

So, anyway… On a completely separate note…

Have you seen the circumcision video on YouTube yet?

I’m not sure how people feel about it in general. I think it’s pretty well divided.  My son was circumcised. Regardless of how you feel about circumcision, I do feel that people should be aware of the practice before they go through with it.  I’d hate someone to live with the regret that I carry, because they never knew what it entailed. The following video is very graphic, and basically made me hate myself for a good long while.