According to the National Center for Biotechnology Information , U.S. National Library of Medicine (which you can find at www.pubmed.org and is where I get most of my information from ) conjunctivitis, AKA pink eye, is the swelling of the conjunctiva of the eye after it’s been exposed to bacteria, viruses and other irritants. They say that viruses are the most common cause though.  So, without a culture, you can pretty much assume that antibiotics are going to be useless. (Not that I personally hop to antibiotics at the first sign of bacteria anyway.)

So, when my son got pink eye, I turned to a natural healing friend and asked for her advice. Her advice was quite simple. She told me to put warm wet tea bags on his eyes, for about ten-twenty minutes, several times a day. She told me to boil the tea bags in water, let them cool, and then place them on both eyes.

And it worked in one day. The rest of the kids in his class that had it were out for a week.

At first my son didn’t really want to do it. He said it’d be uncomfortable. I told him that he should go to his room and put on whatever clothes he wanted. I told him, “Pick something that you’d be comfortable in, that will make you feel better.” 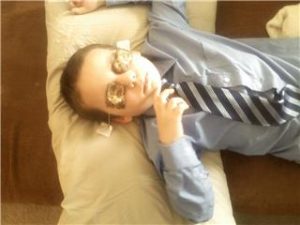