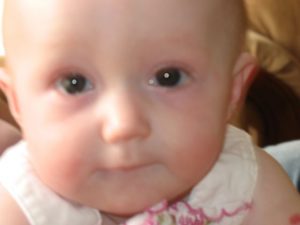 For example, when the FDA learned conclusively that the Benzocaine in teething relief products such as Baby Orajel has caused the deaths of some of our infants, it issued a warning. They did add to their warning that it wasn’t every age group who suffered the most severe reactions to the Benzocaine in the Baby Orajel, ” The cases occurred mainly in children aged two years or younger who were treated with benzocaine gel for teething.” Oh PHEW….

So, provided we use BABY Orajel on our children that are older than two years of age, we should feel safe.

Though… how many American parents use Baby Orajel, or any teething product, on children older than two?

Is Baby Orajel not aimed at babies? Am I stupid to have presumed that it is? Maybe it was named Baby Orajel because it comes in a wittle, bitty tube.

I just have to wonder how many babies have to die from a temporary teething relief product before the products manufacturer gets pressured by the FDA to stop selling the product or even just to start packaging it in single dose blister packs instead of the squeeze tube that can dispense too much of the medicine at once?

At any rate, while the FDA has allowed Baby Orajel on the market, even though it’s associated with some infant deaths, I feel much safer knowing that they issued a warning. Don’t you?

The FDA is looking out for us!

Our babies’ safety is paramount to the FDA. That’s why they issued the warning about Baby Orajel. That way, when you’re at the grocery store and you see Baby Orajel, you will remember (from when you were perusing the FDAs ginormous website in your free time) that even if you use the proper amount of the Orajel, your baby could still turn blue, your baby’s blood could still become deprived of oxygen, and your baby could still die. See…. Our babies’ safety is paramount.

I know you’re asking, “Why they don’t just pull Baby Orajel from the shelves…” but that wouldn’t be fair to all of the teething two, three and four year olds out there. Besides, most babies don’t have a reaction to it if used in the proper amount. So, you see, they can’t pull Baby Orajel from the shelves. YOU just need a warning. YOU just need to know that you probably should think carefully before you give Baby Orajel to babies. Save it for the older kids, for when they are teething.