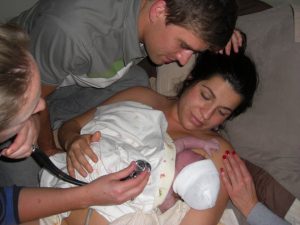 “We are the first state to have equal reimbursement for CPMs written into law. Women on Medicaid now have expanded birth options. And CPMs are now a Medicaid provider type! We have a great birth center licensure bill that other states can use as a model. What an incredible journey.” says Kate Saumweber, who works assisting Midwife Amy Johnson-Grass at Health Foundations Birth Center.

Last year, Minnesota was the first state to allow Certified Midwife assisted births to be covered by Medicaid. Now, looking at a health care budget that has gone broke, Minnesota is taking things a step further.

Recognizing that for most women, a hospitalized birth with routine early inductions, invasive testing and practices, high cesarean rates, and higher costs is unnecessary and often causes more birth related consequences, the state of Minnesota is looking at a revolutionary reform that has the potential to change birthing practices in the United States forever.

It’s unfortunate that it takes being financially bankrupt to get people to open their eyes and see the truth about birth practices. The truth is though, that the current birthing industry is easily twice as financially expensive and exponentially as physically and emotionally expensive as it needs to be.

Does this mean that birthing reform will put new mothers and their children at risk?

According to the CBC, a new Canadian study by Dr. Patrician Janssen from the University of British Columbia found that the rate of death per 1,000 births in the first month of life was:

The Canadian Medical Association Journal declared in their 2009 September issue that planned midwife assisted home births have impressively better outcomes than hospital births. The researchers  studied over 2,800 planned home  births that were assisted by  registered midwives over the course of four years and compared the statistics to hospital births in the same area of the country.

What they found was that the home birth group experienced significantly less:

But those statistics shouldn’t be surprising. What may be surprising is that the home birth group also experienced fewer incidences of:

Yup, that’s right, I said that home births are less likely to result in death.

That’s not to say that infant death cannot occur in a home birth setting, but infants are conclusively less likely to die with a midwife assisted birth than with a hospital birth.

For all the nay-sayers, it should be noted that this was a highly controlled study of comparable birth circumstances. In addition, this is only one of dozens of similar studies that all conclude the same way:

So, now we have to mull that over as Americans.

Oh, wait… did you catch that Medicaid?

Judging from the birth reform happening in Minnesota right now, it’s apparent that they finally caught on.

Look around at your state.  Does your state have a bounty of cash to pay twice as much for a hospital birth as it would for a midwife assisted birth? No? Maybe it’s time for some letters to law makers.

This whole time, I thought explaining to the state lawmakers that a more natural health care system was beneficial physically and emotionally would do the trick.

Time to take the rose-colored glasses off, I guess.  Time to step away from my ideals for the betterment of our nation.

I never even thought about the money.

Yet, that’s almost all that they think about. I guess, if we want reform, we just need to start talking their language.

“Here’s to life after broke!”