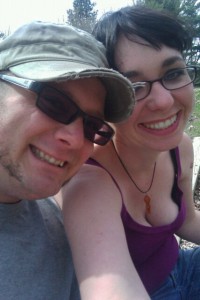 How many times in a quarrel have you wished that you had had a tape recording of a previous conversation? Events in a marriage are only as real as we remember them, and quite often (due to that pesky perspective issue) we remember them differently.

This morning, now that the weather in Michigan has broken and spring has (finally) sprung, my husband wanted to ride his motorcycle to work. Unfortunately, there was no new sticker on his license plate and his registration wasn’t in his wallet.

I asked him if we could call the Secretary of State and get a new one. He responded, “I don’t know, I’ve never lost one before.” Which, incidentally, means that he thought I was the offending party that misplaced the registration. I know this because I am his wife, and as you know, in our infinite wisdom, all wives know how to read their husbands’ minds.

So, figuring that the registration was probably shoved into a glove box when one of us pulled it out of the mailbox last November, we divided up to search our individual cars for the missing registration.

Well, this morning, I was the one who did not lose something. And it was awesome. Often times, there is no clear evidence who the one who lost something is. I admit, I often shove stuff places… but I do that because I don’t like to look at stuff. I like all surfaces to be clear. He likes all surfaces to have something on them.

So, I proposed that we create a Marriage Book of Evidence, and the first item I would like to submit as evidence is that I now have a documented case of being the one who did not loose something.

In my proposal, I suggested that the submitted evidence be entered jointly only. Upon submission of evidence, that page is signed and dated by both parties (Perhaps even witnessed, I haven’t decided.) See, I had a Book of Evidence before, when we were dating when we were teenagers. It was also referred to as my Diary. Unfortunately, with that Book of Evidence, the whole “perspective factor” often made the proof inadmissible as evidence.

So, now you see, right? Now you want a Marriage Book of Evidence as well…