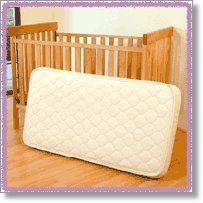 I don’t mean your crib liner or your crib bedding. Think even more basic than that though.

Have you ever smelled a brand new crib mattress?

I’ve done it before and then promptly sought out an organic alternative. If you smell a normal crib mattress, it will smell like chemicals. I’m not even kidding you guys, smell it. Then ask yourself, if it were labelled anything else besides for “crib mattress,” would you lay your baby down on something that smells like that?

They smell toxic in part because, most mattresses include polyurethane foam which often contains, depending on how it’s made, various chemical additives, including formaldehyde, benzene, toluene, and other well established toxic chemicals.

The waterproofing layer of a normal mattress is usually made from PVC. PVC is made soft for babies’ beds by using phthalates which are incidentally endocrine disruptive chemicals. These chemicals (which make up on average 30% of the PVC surface of a crib and are not bound to the plastic and can leech out to be breathed in by your baby) are associated with early onset of puberty, cancers, kidney and liver damage, and asthma. puberty, cancer, and kidney and liver damage. The government is beginning to work on this having banned some phthalates, which is a good thing. Many still remain though. None should be snuggling up to our children.

And my personal favorite part of all of this….

Because these materials are so flammable given that they are basically petroleum  with added chemicals, the manufacturers have to add flame retardants to the crib mattresses.  These chemicals then leach out into the surrounding air. Flame retardants are still used even though they are linked to numerous adverse health effects, including  hormone disruption, immune system problems, behavioral problems, learning delays, memory problems,  and cancer. Lately, states have been regulating what kind of flame retardants can be sued in children’s mattresses, but a new similar chemical is always quick to replace it.

So, the modern crib mattress is toxic foam, wrapped in toxic plastic and all treated with toxic chemicals. And that is scarier than the boogieman for sure.

Oh hey on a completely separate note… Check out this crib mattress I found and added to the index so you can find it easily: Pure Rest Organic Crib Mattress