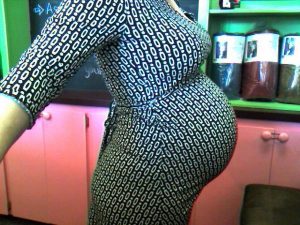 And so I have the scars to prove it.

Yes, I do have the emotional scars of a labor that was too “medical.” I have my regrets. Yada yada. But this particular blog isn’t about that. This is about stretch marks.

“Suck it up,” the doctor said so confidently in response to my questioning about lotions or herbs I should use, “Stretch marks are genetic. You’ll either going to get them or you won’t. Don’t waste your time. Nothing you can put on your belly is going to make a difference.”  And so I didn’t waste my time. And of course, I got lots of stretch marks.

By the time I was pregnant the next time with my daughter, I was heavily involved with the “natural living” scene. So, I understood that while genetics may predispose us to something, how we take care of ourselves is far more important than our genetic predisposition.

With my most recent pregnancy, I knew so much better than I did before. And I kept my skin moist with the greatest butters and oils nature had to offer. I know this all may seem terribly vain. There are beautiful websites devoted to stretch marks as though they are metals of honor. I’m not saying they aren’t. I’m not saying that they don’t have beauty. I’m not saying a mother’s belly is ugly or even that I look down at my own and scowl. All I’m saying, is I didn’t want them in the first place… and I certainly didn’t want more of them.

I wholeheartedly believe (because I didn’t get a single stretch mark from my daughter, nor did my old ones become worse) that you don’t have to get stretch marks just because you are pregnant even if it’s in your genes.

So, what should you do to avoid them?  Cocoa butter is the normal route, and that’s fine, but don’t count on it to work just because it’s natural. It doesn’t seem to work as nearly as good as other moisturizers with healing herbs, like this one by Wish Garden.

Also, you should moisturize your growing belly several times a day. Like keep this in your purse and put it on when you think of it.  (When you’re in the car parked outside of the grocery store.  When you’re at your prenatal appointments. In the drive-thru line at the bank. You know, every time you think of it.)

Most importantly though, if your belly itches, you’re not doing it often enough. And if you start to get them because you haven’t been applying it often enough, the Wish Garden Nipple Repair Salve will actually help the skin on your belly heal as well. So, have them both handy long before you think you need them.