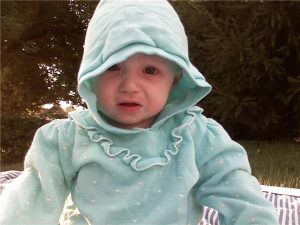 According to the American Academy of Pediatrics, the Agency for Healthcare Research and Quality found a notable shift in skin infection rates as the cause for the hospital admission of children. The percentage rose from 4.5 to 9.4 cases per 10,000 children between 2000 and 2009. It also said that it rose from being the 13th to being the seventh most common reason for hospital admissions of children.

OK, so skin infections are now the seventh most common cause of children being admitted into the hospital according to the latest data studied from 2009.  Given that it has been steadily growing, it’s safe to assume in the last year and a half, those numbers rose even more.

Moms of the United States, NOW are you willing to reconsider antibiotic use?

According to a news brief posted on the American Academy of Pediatrics website, “Canadian researchers reported in Archives of Pediatrics & Adolescent Medicine that the risk of harboring methicillin-resistant Staphylococcus aureus is threefold higher among children who took one or more antibiotics one to six months before they were diagnosed with the infection. The number of antibiotics taken was directly linked to the risk of infection, with those who got at least four prescriptions having an 18-fold increased risk for MRSA, the study of U.K. children found.”

If you read the side effects of the antibiotics prescribed for children, right there it will say that your child’s chances of getting MRSA in the future are increased.

My doctor explained it like this. Your body has common bacteria living on and in it all the time. It’s pretty harmless. Picture your child’s skin as a huge neighborhood with fairly harmless bacteria living about it. Then, your child gets a sinus infection and you give them an antibiotic. That antibiotic mostly kills all sorts of bacteria all over your child’s body. Not just in his sinuses. Notice I said, “mostly kills.”

Some of that bacteria doesn’t die though. The bacteria’s neighborhood was just attacked by an enemy leaving homes “unoccupied” all over. The bacteria that is left has learned the weapons you (the enemy) uses to kill it.  At this point, it mutates (kind of like the Borg from Star Trek) and moves forward with this new assimilation of defense against the antibiotic you used. Give it a couple of months, and that remaining bacteria will multiply and move into all of the “uninhabited” homes on the body.

So, now, you may have cured that sinus infection with antibiotics, but on your child lives new, stronger bacteria that is resistant to certain antibiotics. The more antibiotics you give the stronger and more resistant the bacteria gets.

So next time your child gets an infection, go ahead and take him to the doctor if you want, but on the way TO the doctor, stop at the vitamin store and buy some Planetary Herbals Oil of Oregano. Or better yet, buy it right now (here’s the link I found and indexed for you) and then have it on hand.

Oil of Oregano doesn’t develop resistant strains of bacteria. Oregano and its key player carvacrol has been used to prevent infections throughout human history. Of course, the FDA needs me to mention that they don’t approve of that statement. Oil of Oregano has not been evaluated by the FDA because Oil of Oregano is a nutritional supplement, not a medicine. Herbal supplements are prohibited from being considered medicinal or curative by law.

If your child can’t swallow a pill, use a pin to prick the capsule and squirt it in a dropper, add some olive oil to dilute and drop it in his mouth a few times a day for a couple of days. It’s not going to taste good, but it will be far more pleasant than living with MRSA.

If you want to learn more about Oil of Oregano and how it works as well as how well it works, please read this previous blog.