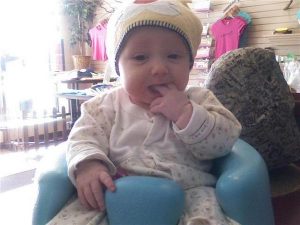 The Bumbo seat was imaginatively designed to let a baby between 3 to 14 months of age to sit upright without any external support. I’ve seen women using it as a baby sitter while they fold laundry or use the bathroom. I’ve known women to use it just for fun to keep their baby upright while interacting with them. I’ve seen it used as a booster seat at a restaurant. I’ve read that some therapists are using it to help develop muscle control.

Conversely, I’ve heard a lot of people claiming that Bumbo chairs are developmentally inappropriate, poor for the spine, and that they encourage improper positioning so they shouldn’t be used but for short periods of time.

One pediatric physical therapist explained during an online discussion,  “The bumbo is designed in such a way that the baby’s pelvis is ‘locked’ into a posterior pelvic tilt, with hips flexed. Most of the time when I see little ones in bumbos (from my own personal observation as well as doing a search on google images), the baby’s feet are either pointed out or in, which means that the hips are either externally or internally rotated. This alignment essentially immobilizes the pelvis and prevents any weight shifting, which is what you want to suppress if you are wanting your little one to stay in the same spot for a while. The biomechanical alignment of the bumbo is such that the baby’s own alignment and muscles are being used against them in order to essentially lock them into a position.”

Over a million were recalled some time ago because people were leaving their child unsupervised sitting in them and that’s very dangerous. Apparently while the design was pretty sturdy, if a strong enough baby arched their back just right, they could slip out and fall onto the floor from a counter.

I used the Bumbo chair for Ayla, as you can see from the photo. She loved it. I mean LOVED it. When I had my store, she used to love to sit in that chair (generally for around a fifteen minutes at a time before she’d want to crawl into my Moby Wrap again) and greet customers and “talk” to me. While she very much loved the Moby most of the time, I believe she found the brief periods of vertical independence to be an exciting novelty. She certainly liked the attention it brought her. She had good neck control from the day she was born, so she did just fine sitting in the chair at four months.  No wobbling or anything.  I have to assume that if she were sitting in it looking like a bobble head, I would instinctively feel she wasn’t ready to sit.  After all, don’t most mother’s extend their fingers out so that they support the neck when lifting a new baby by the underarms momentarily? If the mother is with her child, using this chair as a novelty or a momentary tool so that she can use the bathroom, don’t you think an attentive mother would instinctively know when Bumbo time should be over? I mean, I did.

Still another mother points out, “My daughter is not delayed, maimed, weak, or otherwise altered from having spent a few minutes laughing her head off sitting in a goofy little chair. No, she did not need Bumbo. Who cares? She thought it was a riot. We like to offer her diverse experiences.”

Maybe the problem isn’t so much the Bumbo baby seat, as it is the nature of a minority of mothers to be neglectful of their babies’ bodily cues? Or is that trait not excessively rare anymore?  What’s your take?