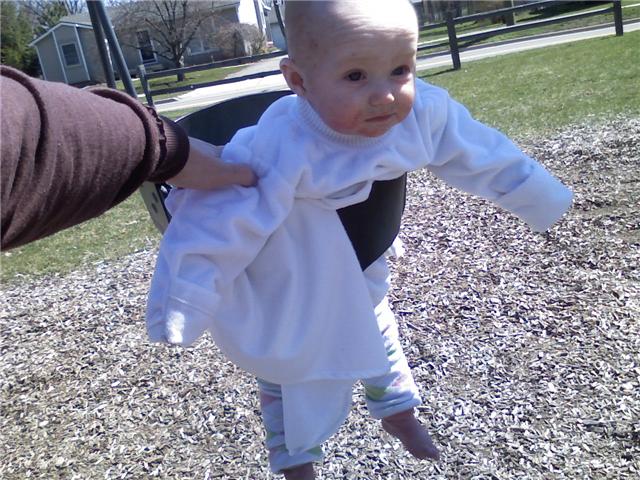 During one office visit when my daughter was about six months old, she was supposed to get her well baby shots.  At that time though, she had had a skin infection, and I felt at that time that I wanted to wait until her immune system was stronger. The photo to the left was from the day of that doctor’s visit. You can see her eyes just aren’t lit up. You can see the infection of her face. You can see that she is not feeling well. I took her to the park to try to get her some vitamin D from he sun to boost her immune system. She usually liked the swings, but on that day, she didn’t have the energy for it.

I had no problems with vaccines at that time. My older children had been vaccinated. I just didn’t want to vaccinate on that particular visit because she wasn’t well.

The doctor said that a skin infection wasn’t a counter-indication for vaccines.

Given that my daughter was consequently on an antibiotic also though,*** (which apparently required her to get her liver tested if she was on it for more than one round) I felt that her body didn’t also need to deal with vaccines at that time.

He disagreed with me.

So, they had me sign a waiver.  I read the part where it said I was knowingly putting my daughter’s life at risk by refusing vaccinations at this visit and questioned him. I didn’t feel I was putting her life at risk. I felt like I was being cautious with her life. I felt that I was protecting her liver. I was planning to go back in a month or so for them. So, I said I didn’t feel comfortable signing that form.

So, basically, I was tricked into signing a waiver that I didn’t even agree with.

I guess in some respects that moment ignited all of my vaccine curiosity, because it was the moment that broke my trust in him. I could tell he was lying, but I had no proof. So, I signed it. The mistrust he created was the first big factor that made me more deeply investigate vaccine issues.

I did go back a couple months later and got another round of shots, which she had a reaction to as it turned out. Her entire torso became inflamed and red with a sand paper rash. That was a couple of years ago, and I have since decided to delay vaccinations until she’s older. Possibly indefinitely, but I’m crossing that bridge when I get to it. It will depend on her individual health needs. For now, she has been to an allergist and has confirmed allergies to eggs and peanuts. Latex may be a factor too. We don’t know, there’s still many allergy tests to go. For now, her new pediatrician has said we should not give any more vaccinations at this time.

Her new pediatrician has never even mentioned a waiver to me. I suppose he has other ways of “documenting” our discussion.

Reflecting on her old pediatrician and how he made me feel ignorant and negligent for refusing to vaccinate (while my daughter was on strong antibiotics from a skin infection at less than six months old) made me curious.

So, I went searching.

And I found a pdf file assembled by the American Academy of Pediatrics for doctors. (Click here to view the file)

And that’s when I read the part where the AAP says, “This form may be used as a template for such documentation but should not be considered a legal document and should not substitute for legal advice from a qualified attorney.  This form may be duplicated or changed to suit your needs and your patients’ needs.”

Here’s an alternate form you can give them, since all they really need on file is some documentation proving that the doctor discussed vaccinations with you. They probably will refuse it though. In that event, you could sign their form, and write, “Signed under duress.”  That way, it wouldn’t be considered a “legal admission of negligence.”

I don’t know, I doubt it would ever come to it, but I personally don’t want anything out there with my signature on it where I am saying that I’m neglectful, when I was trying to be quite the opposite…. for many reasons…. perhaps the greatest of them being: Principle.

***At that time, I didn’t know about natural supplements (like Oil of Oregano) to try before getting antibiotics.