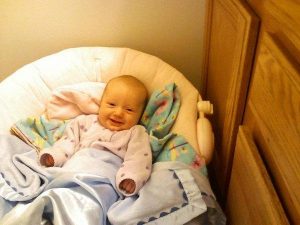 One of the biggest surprise challenges of being a mom to an infant is figuring out how in the world to take a shower. Ideally, you take a shower while dad watches the baby right?

Well, what about if the baby’s father isn’t around? What if you’re a single mother? Or what if the father works a lot?

For one reason or another, this is a common complaint with new moms.

For me, I simply had to make my showers really quick. Shaving wasn’t always an option. I could have had my husband watch the baby every time I took a shower, but I’d generally have so much to do before he left for work that I didn’t get around to showering until mid-morning. So, I used one of those new bouncy seats. And I left the curtain partly open, so I could pretend like I was putting on a fabulously entertaining show for my daughter.

I know there has to have been a better way.

I suppose showering at night is an option, but I don’t function as well if my shower isn’t early in the day.

This post isn’t about whining. It’s about opening up a discussion so we can brainstorm tips for new moms, so that perhaps, they will have an easier time figuring out what to do than we did.

How did you take a shower? Did you wait until the baby was a sleep? Or did you save that time for something else like working from home, doing chores, or that ever elusive “sleeping while the baby sleeps” technique I always hear so much about?