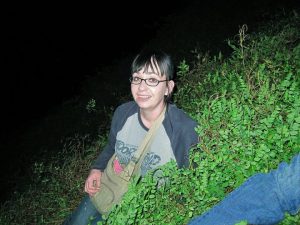 The other night, in response to my horror over turning thirty five, two of my friends that I’ve known since High School joined me in an old high school tradition: Climbing the steep back of the local ski “mountain.”  It’s pretty high. And it was a warm night. We met at a play ground, just like old times. The mosquitoes were in full force. I had tossed a tiny sample of the Garden Dreams catnip bug repellent into my purse just in case my friends forgot to bring repellent.

I had gotten the sample a while back from Crystal in order to be able to test it for the giveaway blog featuring it that we held.

After the topic shifted from meeting husbands to annoying mosquitoes, I offered them both what little bit of Garden Dreams natural catnip mosquito repellent I had left in the tiny container. Not long after that, we embarked on our adventure.

Our normal old climbing route was ruined by a new homeowner that apparently thought we were kids and told us we were parked on private property when we were parked in a circle at the end of the non-private road.  So far, the repellent seemed to be working… at least on the six legged irritants that were bugging us.

Then, we tried parking at a church and walking through the woods. By the light of only our cell phones though, it was clear that we were actually walking by a swamp that stood between us and our climb. Still, no mosquitoes though.

Eventually we ended up back at the school and decided to walk along the road, which was near a swamp and was lined with wooded yards and brush. No mosquitoes. We crossed the street and went through some shrubs and trees without getting bit (or caught.) The whole walk was about a third of a mile to the back of the mountain. The climb was steep. We had to grab on to shrubs and long grass that was waist high to pull ourselves up.

Follow the link to order your tub so that you can climb mountains without irritation too:  I Can’t Be Bothered Bug Lotion