Did you know that the WHO put out a code of conduct that it intended governments to strive for regarding the marketing and advertising of “breast milk substitutes?”

Not like last year or anything either… about THIRTY years ago!

I need to be really clear here. I do not advocate the rude treatment of women who formula feed. My beef is not with them. If you don’t believe me, read this previous blog where I discuss my feelings on the great breast vs bottle war.

My favorite part of The International Code of Breast-Milk Substitutes says:

“Informational and educational materials, whether written, audio, or visual,dealing with the feeding of infants and intended to reach pregnant women and mothers of infants and young children, should include clear information on all thefollowing points: (a) the benefits and superiority of breast-feeding; (b) maternal nutrition, and the preparation for and maintenance of breast-feeding; (c) the negative effect on breast-feeding of introducing partial bottle-feeding; (d) the difficulty of reversing the decision not to breast-feed; and (e) where needed, the proper use of infant formula, whether manufactured industrially or home-prepared.  When such materials contain information about the use of infant formula, they should include the social and financial implications of its use; the health hazards of inappropriate foodsor feeding methods; and, in particular, the health hazards of unnecessary or improper use of infant formula and other breast-milk substitutes.  Such materials should not use any pictures or text which may idealize the use of breast-milk substitutes.”

I suppose WIC does a pretty good job of this. I’ve never seen a coupon for formula or a picture of a baby drinking from a bottle when I was on WIC. Everywhere else though, formula is in your face.

Maybe it’s just the area I live in. I haven’t really left my county much since I had babies, but formula is still pretty in your face. I went home from the hospital both times with actual samples and coupons for formula, even though I said I was breastfeeding. Then, after that, I got coupons in the mail, even though I was adamant about breastfeeding always. Then, at the doctor’s office, in 2002, my pediatrician told me  I would need to supplement with milk or a toddler formula since my son had turned one, just to make sure he was getting the nutrition he needed. I guess being in the 97th percentile for height and weight wasn’t a good enough indicator that he was growing.  Americans are getting (or have stayed) pretty nonchalant about how vitally important breastfeeding is for infants. It also seems like distributors and manufacturers have avoided the seriousness with which this code would hope to be taken. They probably feel like they are following the rules, but if they are, then why, as an American mother did it still feel like formula feeding was a perfectly find choice and no pressure would be put on me to breastfeed if I didn’t feel like it?

This Code clearly expresses what they feel should be the intended purpose of formula manufacturers, which is to supply a breast milk substitute when conditions arise that make breastfeeding not possible. The WHO doesn’t look at it as a choice. It looks at it as a back-up. Let’s be real, Enfamil and Similac don’t want to be a back-up. They want to be the choice. I mean, OF COURSE they do.

Have you been to the Similac webpage yet? Can somebody please explain how this Similac video isn’t in violation of the Code? No where in the video does it mention the superiority of breast milk. It does mention breast milk, but only by saying, “Lutein is a nutrient babies can get from breastmilk or Similac.” There’s photos of a mom through her baby’s eyes. Then, that mom pops up inside a magical “memory bubble.”

Here’s some screen shots I got, which shows formula feeding with their formula as a nearly magical experience for the baby. 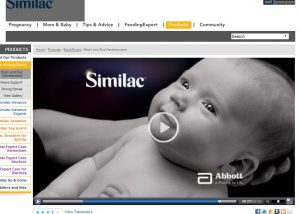 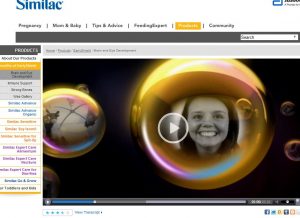 I mean, I don’t understand how this is not in violation of the Code which was designed to help babies achieve the best health possible, because even before amazing digitally altered videos in 1981, we understood the powerful ability of advertising to create an emotional connection which could sway the very beliefs of a consumer. I don’t know about you, but after watching that video, I kind of want to buy some Similac.

Oh! But hey, I almost forgot to tell you; then it says, “Nongovernmental organizations, professional groups, institutions and individuals concerned should have the responsibility of drawing the attention of manufacturers or distributors to activities which are incompatible with the principles and aim of this Code, so that appropriate action can be taken.  The appropriategovernmental authority should also be informed.” So, that means us, right? Well, now, at least we know what we’re supposed to do as concerned individuals…

The WHO says that should we find any manufacturer or distributor not following the ideals in this code, we have the responsibility of:

Anyway, here is the link where you can read stuff for yourself. And then, here’s the link that proves the WHO is still using this Code (by the way, they capitalize it, I’m not doing it myself to make it look more important.)

And lastly, just to make it easier on you while exercising your responsibility to inform manufacturers and distributors,  here’s some sample wording you could use in your e-mails or facebook posts: Your conduct of (insert violating conduct here) is in violation of the  International Code of Marketing of Breast-Milk Substitutes of The World Health Organization which was endorsed in May of 1980 (during the 33rd World Health Assembly) and adopted by the Health Assembly in May 1982. I was just wondering what you are going to do to rectify your violation of this code?