My five year old, Patrick, decided yesterday that instead of doing chores, he was going to run away… barefoot.

I told him I wished that he wouldn’t, but then I calmly pointed out he might need shoes. As he started to go back inside to get shoes, I told him to grab a flashlight while he was in there because it would be dark soon.

“Wait a minute,” I said, “I thought you were afraid of the dark.”

Then I said, “Are you sure? Would you like to test it tonight before you end up out there all night in the dark?”  He asked me what I meant, so I told him he should wait until tomorrow to run away so that he could test out if he was still afraid of the dark after dinner.  I also suggested he might want to pack up some snacks to eat and some of his piggy bank money because he doesn’t even have a job lined up. I told him not to worry though, I could make some calls and find him a job moving rocks or cutting lumber. 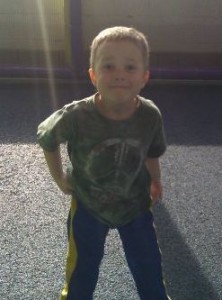 “Don’t worry baby, I will help you pack your bag up and try to find you a job, tonight after you test out if you are afraid of the dark.”

He seemed pretty confident at this point. I told him, “So, then if you still want to run away tomorrow, you can be more prepared. It will be your choice. And if you decide tonight that the dark is still pretty scary, then you can just run back inside really quick, I will hug you and then you can just keep living here. But if you decide to stay, you’ll have to do some chores still.”

He said it was a good deal.

Sitting at the dinner table, my husband asked him where he planned to live. I was really supportive of my son, pointing out he could sleep in the tunnels on the playground equipment. I pointed out that it’d be really convenient, because if he was ever really hungry, the garbage dumpster from the cafeteria was right there. Then, I said, “Oh, honey, remind me to pack your insect net so you can catch the bugs flying around the food before you eat it.”

You could tell by the look on his face that home was starting to look pretty good at this point.

Everything was falling into place…

Right after that my five year old informed us he wasn’t going to be running away. I gave him a huge hug and told him I was glad. Then, in the most beautiful moment I’ve witnessed between my two (normally bickering) boys… they hugged each other tightly, Noah still crying and Patrick smiling saying, “I didn’t know Noah loved me this much. I thought he hated me.”

And all was right with my world… Until it was time for them to pick a movie to watch together before bed that is.