Somewhere around 19,000 Americans die of MRSA infections annually these days. That means MRSA kills more people than AIDS in our country. The World Health Organization says antibiotic resistance is one of the leading public health threats on the planet.

On the flip side, in Norway, a country where tissue packets have printed on them public service messages like, “Penicillin is not a cough medicine,” their citizens enjoy some of the lowest incidences of MRSA in the world.  What do they do differently? 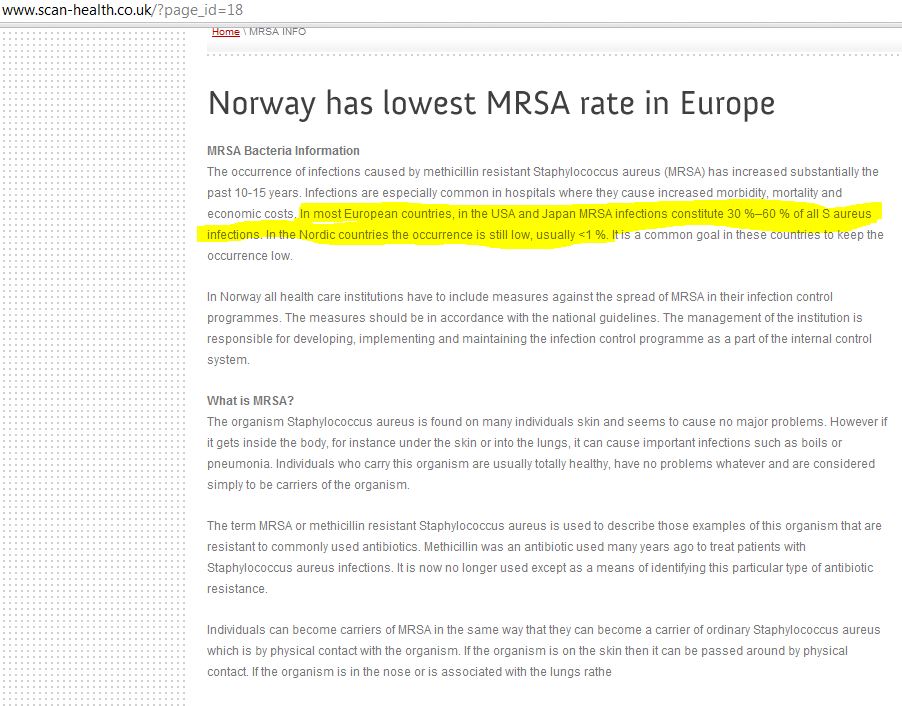 They have stopped the insane reliance on antibiotics and instead are using very simple, intelligent measures of disease control. Most cases of MRSA in Norway are brought in from people travelling abroad. They are using simple techniques like testing people for MRSA upon admittance and having healthcare staff stay home with the are carrying the bacterium.  When MRSA is introduced to their hospitals from the outside, that patient is treated separately from the rest of the hospital and great care is used to prevent further spread.

And while you can find random studies blaming the Norwegian methods for an increase in MRSA, the perspective in those studies is skewed in my opinion.  A simple map of Europe and it’s distribution of MRSA shows the real facts that are substantiated by a plethora of studies replicated in small scale, all over (even here in the US.) The map below shows just how well the countries that make up the Netherlands compare to the rest of Europe as they continue their reliance on antibiotics: 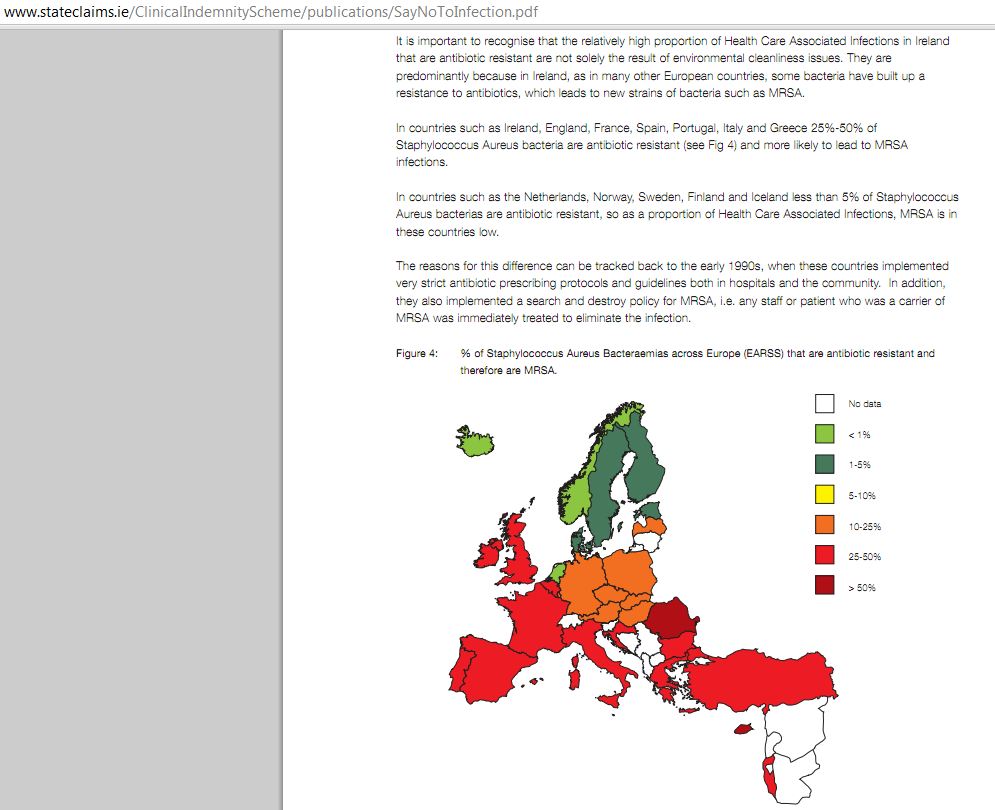 Take a look at the strategies Norway has implemented that have allowed them their boasting rights during what can only be described as their “post-antibiotic era.” 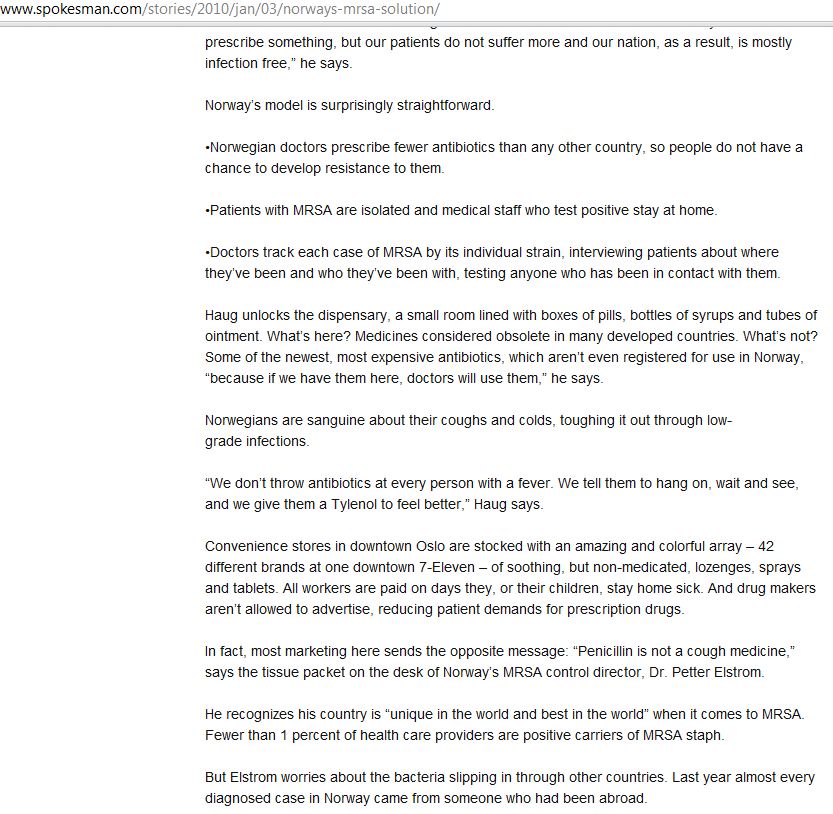 My favorite part is where it quotes the doctor saying, “We don’t throw antibiotics at every person with a fever. We tell them to hang on, wait and see, and we give them a Tylenol to feel better.”

That statement also got me to thinking though. Imagine if you married this concept of not abusing antibiotics with medical use of herbal remedies. The FDA can not approve the use of herbal remedies for medicinal purposes though because of the Dietary Supplement Health and Education Act of 1994 (DSHEA.) This act (meant to protect herbal remedies and supplements against over regulation as well as consumers from being tricked into buying expensive herbal treatments that may or may not work) has backfired and tied our natural healing hands behind our backs. Now, herbal remedies are not allowed to be reviewed by the FDA and consequently, they are not allowed to be used as medicines. The FDA will not approve anything to be used as a medicine if they can not regulate it, and they are not allowed, because of the DSHEA act to regulate herbal remedies. So, we’re caught in a trap.

If our general medical community was allowed to treat infections with herbal medicines, MRSA and MSSA related illnesses and deaths could come to a screeching and immediate halt.

In just ONE MONTH, the hospital in Oslo, Norway referred to above saw MRSA virtually eradicated within their facility. If we implemented the same kind of strategies and married them with natural antibiotics, imagine the potential…

Tea Tree Oil has been seen to be a potential super power against Pulmonary Tuberculosis. Parts of Oregano and Thyme Oil have been shown in various studies to eradicate staph. Cinammon Oil at just 1-2% is effective to prevent biofilm expression Staphylococcus epidermidis (2009, American Society for Microbiology.) After just hours of exposure to colloidal silver one study showed both gram-negative and gram-positive bacteria can be killed at the very low and highly safe concentration of 10ppm. Head on over to our National Library of Medicine and see for yourself. There are countless studies about natural remedies and their potential to be used when antibiotics, due to their over use, are finally rendered pointless. To find the good information, you will have to use their science lingo. Merely typing the common name will give you limited results. For substantial results, you will need to know the name for each oil’s active component or its scientific name.

Search terms for the US National Library of MedicineNational Institutes of Health:

Then imagine a world without antibiotic reliance… because we’re going to have to soon enough.