Merck’s Vaccines Division, Julie Gerberding confirmed to CBS News while she was Director of the CDC that, “if you’re predisposed with the mitochondrial disorder, it can certainly set off some damage. Some of the symptoms can be symptoms that have characteristics of autism.” That’s just a loose tie though. That’s not the MMR vaccine literally CAUSING autism. Dysfunction in mitochondria in the brain is already associated with a number of other neurological conditions, including Parkinson’s disease, Alzheimer’s disease, schizophrenia and bipolar disorder.

In a population-based study in 2007, the medical conditions of 120 children with autism was screened. 76% were diagnosed with typical autism and 24% with atypical autism. There are different types of autism. It would be smart to assume that there are also likely different causes. 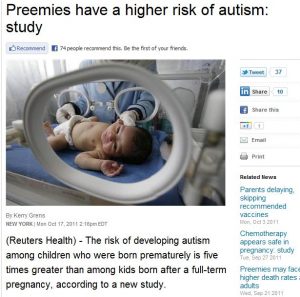 Apparently, babies born prematurely  also have a higher risk of autism.  The Centers for Disease Control and Prevention estimate that one out of every 100 eight-year-old kids has autism. The new study, which was published in the journal Pediatrics, found that five out of every 100 young adults who was born weighing less than four and a half pounds had autism. That certainly does seem to indicate a link, doesn’t it? The premie population seems to be five times more inclined to get autism.

But what else? SOMETHING is different between the 95% of tiny premies that didn’t get autism and the 5% that did, because with the vast majority of children getting vaccinated, it can’t be just that.

“Another thing very injurious to the child, is the tying and cutting of the navel string too soon; which should always be left till the child has not only repeatedly breathed but till all pulsation in the cord ceases. As otherwise the child is much weaker than it ought to be, a portion of the blood being left in the placenta, which ought to have been in the child.”

I’d be very curious, of those five percent of babies who were born weighing less than four and a half pounds, could those be the ones who were so high risk that their cords were clamped and cut immediately after birth to be risked away to the ICU?

I only mention this because I found this release online earlier today: 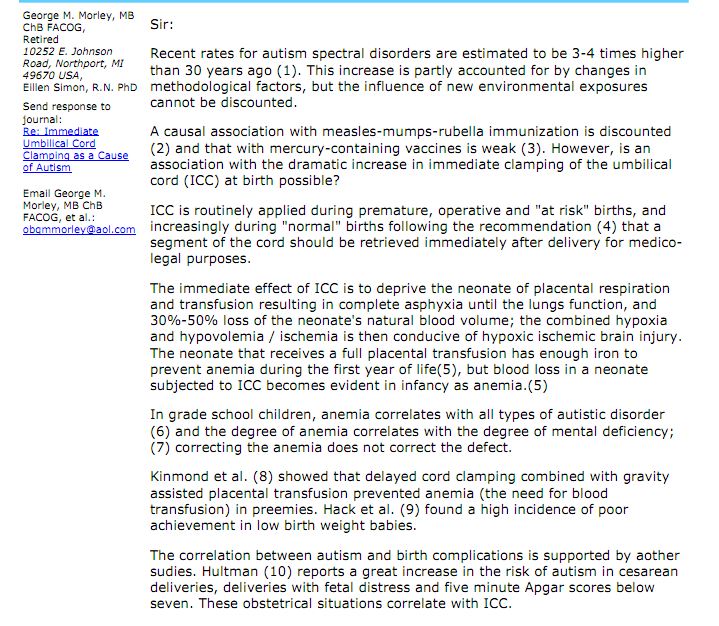 Another interesting development though is that researchers at the  University of Missourihave found distinct differences between the facial characteristics of children with autism. This could help researchers understand what causes it. According to the team:

New evidence suggests that a child most likely must be predisposed to autism in order to ever get it. So, what is that predisposition factor? Scientists at Cold Spring Harbor Laboratory  believe they know. One of the most common genetic alterations in autism — deletion of a gene cluster on chromosome 16 causes autism-like features.  Those researchers replicated the gene cluster deletion in rats and found them to exhibit hyperactivity, difficulty adapting to a new environment, sleeping deficits, and restricted, repetitive behaviors. According to the researchers, this awareness could prove to provide early diagnosis and better clinical intervention.

Does your child suffer from autism?  These theories being proposed about the ties between premature birth and autism, can you provide anecdotal support?