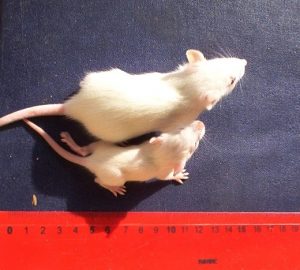 According done in a study done in France, GMOs are simply unsafe. Their reasoning is that RoundUp, Monsanto’s formulation of the herbicide glyphosate and the herbicide that most of our foods have been treated with and genetically modified to resist, could cause cellular damage or cellular death in amounts to be expected from our food sources.  Further explanation is offered in two other French studies which you can find here and here. You can find another study done in Brazil calling RoundUp, and consequently our GM crops in the US toxic.

One of the most disturbing studies of GMOs was done in Russia in 2005 by the National Association for Genetic Security (NAGS), Doctor of Biology, Irina Ermakova. It shows GMO soy, which is found in nearly everything in our  American diets, as having disastrous implications including death, infertility and poor health. Take a look at the photo comparing a normal rat from the study and a rat fed GMO soy from the study on the top right. Then, look at the graph showing the death rates below. That study was contested by subsequent studies. Though in those studies, the GMO food was given after pregnancy had already occurred, when in Ermakova’s study the GMO food was fed to the rats prior to fertilization.

The evidence mounted even more against RoundUp Ready genetically modified crops in Argentina when studying tadpoles and chicken embryos exposed to the herbicide used on GMOs reflected issues Argentinians were seeing in their own population living near GMO farmland.

The American Academy of Environmental Medicine (AAEM) urges all doctors to prescribe non-GMO diets for all of their patients. If you follow that link, you will find many more independent animal studies showing organ damage, gastrointestinal disorders, immune system disorders, and infertility.

On the flip side, lots of highly esteemed scientists are pretty adamant that GMO consumption is totally safe.

This guy is Gary Williams. He works at the Department of Pathology at New York Medical College in Valhalla, New York. He is brilliant. He  even received a Merit Award in 2009 by the Society of Toxicology. He says that GMOs and RoundUp are perfectly safe. Similarly, in an “independent” review paid for by the Burdock Group, Williams said Aspartame concerns are completely unfounded too. Oh by the way, the Burdock Group that managed the “independent review” is financially supported by Ajinomoto Company Inc., a producer of aspartame. Gary M. Williams was the Chairman of the American Health Foundation (AHF) which was funded in part by The NutraSweet Company. AHF Board of Directors have included representatives of PepsiCo and the National Soft Drink Association. I’m sure he was completely unbiased though in his professional reviews of both Aspartame and  RoundUp.

Now, Gary worked with other authors on the RoundUp and GMO food safety review I was talking about. For example, Ian Munro is the executive VP of CanTox Health Sciences International (now known as Intrinsik.) One of their slogans is: We protect our customers interests, helping them successfully meet regulatory obligations and bring products to market in a time efficient and cost effective manner.

One of their customers is, of course,  Monsanto.

So, the “independent” review of the herbicide used in Monsanto’s RoundUp was authored by people with very, very strong ties to Monsanto… but I’m sure the review was completely unbiased and based in science, not economics.

Though it is interesting that Intrinsik/CanTox,  found that people living on a military base in Canada that was regularly exposed to Agent Orange need not be concerned.  Did I mention that Monsanto is the company that brought us Agent Orange? I have to assume that these companies are following guidelines and being honest in regards to toxic chemicals though. Right?

Alright, I’ll admit it, I wasn’t actually trying to present both sides of this. Why would I though? I know our GM foods are unsafe. I just wanted to walk you through the process I had to go through in order to come to this conclusion.

Forbes Magazine’s readers ranked Monsanto as the most evil corporation in the world.  I’m going to have to agree.

I guess, now is the time when I should announce my own “bias.”

Glyphosate is the organophosphate compound and is the active ingredient in Monsanto’s RoundUp. The EPA banned most residential uses of organophosphates (OP) in 2001, but they are still sprayed agriculturally on fruits and vegetables. They can be absorbed through the lungs or skin or by eating them on food.

In an investigation, it was discovered that Monsanto and the industry has known that glyphosate causes malformations in large doses since the 1980s. They also knew that it causes birth defects in low doses since at least 1993.

In a study published in 2001, organophosphates (such as the active ingredient sprayed on all of Monsanto’s GM crops) were implicated in causing deletions of the sex chromosomes in sperm. The study looked at men’s sperm in a population that had been exposed to OP  and even noted there was a direct link to exposure and sex chromosome diseases such as Turner Syndrome.  These findings were confirmed in a larger study in 2003. Turner Syndrome affects 60,000 females in the United States. This disorder is seen in 1 of every 2000 to 2500 babies born. Turner Syndrome was first announced (I assume that has to do with the coincidental timing of the development of the forerunners of these chemicals for the first time ever) in 1938.

My daughter was stillborn from Turner Syndrome in August of 2000, several years before my family swore off genetically modified foods.

Until these findings, I have been consistently told that there has never been any known cause of Turner Syndrome. No other causes of Turner Syndrome have ever been offered, and now, I learn that the answer was likely right in front of me the whole time…  on public and school lawns, in the air, and in my food.

Instead, like the other genetically modified soy fed  lab rats in the study, she was just dead.

And so… I am sharing this with you today to implore you: If you are pregnant and especially if you are trying to conceive, make sure you and especially the father-to-be steer clear of genetically modified foods. Choose organic so that your baby doesn’t have to be a lab rat.

Special thanks to Kathy Minielly for her roll in the researching of this post.