The parents of the family that stars in the high debated reality show are the topic of even more debates as they released photos from the memorial of the baby that they lost before birth. People are saying they are disgusting photos. They are saying these things should remain private.

Let me preface this whole thing by saying:

The only thing that I am “disgusted” with about this entire thing is the disgusting COMMENTS people have been making to and about this family.  It started as soon as she lost the baby. People asked when she would learn her lesson that she just has too many kids. Is that what pregnancy loss teaches us?  Is that why it happens? REALLY?! Because my daughter was stillborn during what was my very first pregnancy.
People asked when she would realize that it was time to turn in the Mama Hat for the Grandma Hat.  Will these same people say that to the co-worker attempting pregnancy for the first time at 45?  Because that’s how old she is.
Take a look at this comment I found on the article that showed the photos:
When he says “act civilized,”  I wonder if he means, never use capital letters? Telling someone who already has children that they should just be grateful for those children instead of grieve for the baby that just died is ANYTHING but civilized. That child had a name: Jubilee. See, THIS VERY ATTITUDE is most likely why the Duggars chose to share these photos. Look at what was inscribed on the photo: 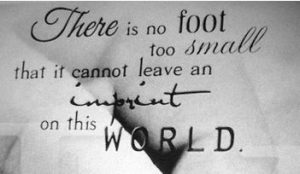 This is what the world can learn from the publication of their loss.

Without making any political statement whatsoever, I would like to add that the photos of this child’s beautiful hands and feet can help so many women understand their own losses. These photos can validate to so many of us who have lost a baby that they were real people.  Instead of loathing the Duggars for showing us a tiny set of feet and hands, perhaps we should thank them for helping us see what we almost never do.