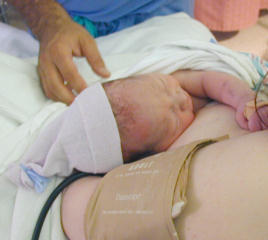 My water broke with my son and I eagerly rushed to the delivery room at the hospital where I was promptly told about their hospital policy. Once a woman’s water has broken, she has 24 hours to deliver before she has to submit to a c-section.

Naturally, I wasn’t progressing as fast as they wanted, so they gave me pitocin.  The pitocin lead to a tetonic contraction, which led to less pitocin and an epidural. The epidural led to four hours of pushing and a limp, unresponsive baby boy that thankfully came around. All this seems to indicate that maybe he wasn’t quite ready to come out yet. Maybe he just needed a couple of days…

I can not fathom how all of this intervention seems less risky than just giving me some extra time. The American Congress of Obstetricians and Gynecologists calls for the immediate induction of labor.  But this doesn’t make sense because his vitals were great, I tested negative for Group B strep and they had me on an IV antibiotic anyway, just because my amniotic fluid didn’t gush out all at once and they felt like it.

The study that all of this is based on has some info that they didn’t seem to account for. “Neonatal infection rates were confounded by multiple digital vaginal exams during labor. According to another secondary analysis, the percentage of infections trended upward with the number of vaginal exams independent of other factors, including time from rupture of membranes to labor onset and length of active labor “(Seaward, 1998). The odds on infection roughly doubled when you compared women who were given 7-8 exams (like in my case when they come in every hour or so to check progress) with women having fewer than 3 vaginal exams.

So, you see… this “policy” is based on a study that was highly flawed.

In the end, after he was given medication to reverse the medication and make him wake up, he ended up with no infection and he was just fine.

Except for the fractured clavicle… his battle wound from a birth my body wasn’t ready for.

We would have been safer with a midwife.

I get told, “You had a beautiful healthy baby and that’s all that matters.”  Well… no. That’s what matters MOST, but that’s not ALL that matters.