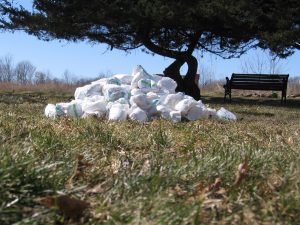 When I started, the economy was still good and finances were not the reason. As the economy collapsed, I was very thankful for my decision to cloth diaper. When trying to convince my first son’s father that our son should be diapered in cloth, that was one of my key selling points. I explained it would save us thousands of dollars. Then, I had him imagine having thousands of dollars he didn’t plan on having. I even implied that maybe we could afford scuba diving equipment for him.

I’d love to say that I chose to cloth diaper because it’s so much safer for babies, but at the time, I had no idea how much better it was for them. I hadn’t even heard the word sodium polyacrylate at that point in my life. I didn’t know that disposable diapers caused cracked skin, urinary tract infections or diaper rashes. I had no idea that some of the chemicals in them are known carcinogens, that they are capable of disrupting the endocrine system or that they can impair fertility. I just didn’t know.

I didn’t recycle then, so it wasn’t because I was an environmentalist.

I did it because when I saw his face, and looked into his future, I didn’t want the accountability that disposable diapering would give me. I had seen modern cloth diapers. I knew the state of the environment. I knew what the future had in store for petrochemicals and while I really didn’t care (in my young adulthood) about my social responsibility to do the best that I could… to do my share, I knew that some day, disposable diapers would be a thing of the past.

I knew that perhaps as early as my own son’s adulthood, cloth diapers would be the normal parenting choice again, as they had been throughout history. I just knew. That was ten years ago, and my predictions are coming to pass. The amount of moms that are choosing cloth is growing exponentially, and I get to say that I was a part of this movement.

If a child is potty trained at two (which admittedly is not as likely as three for boys), then even with conservative (about 4-6 a day) diaper use, this is what they will leave behind in disposable diapers:

That’s for one child. There are about 75 million children in the US.

The reason I cloth diapered my son… is because I didn’t want to face him in the future when he grew up and asked, “Mom! What were you thinking? You were a part of that?!?!”

What would I say to him?

“Sorry, son, we didn’t feel like washing them… So, we figured we’d leave them for you to clean up.”

No way, man.  I wasn’t about to set myself up for that.

Special thanks to Jen Swarthout for the photo help.