Merck makes the flu vaccine Afluria and and it’s like the greatest thing under the sun. (Yeah… but not greater than the sun!)

When everybody talks about how effective the flu vaccine is, it’s so interesting because people just assume that they will automatically get the flu without the vaccine. I know I’ve fallen victim to this idea for no good reason except  media hype, though I’ve never gotten a flu vaccine.  But check this out. When you actually look at the numbers, a person’s chances of getting the influenza in one flu season aren’t even that great anyway if Merck’s study truly represents flu contraction statistically.

I made you a graph based on their numbers so you can see. This is the percentage of people in their study that ended up with positive flu cultures over the course of that flu season after they waited two weeks for the vaccine to start its awesomeness: 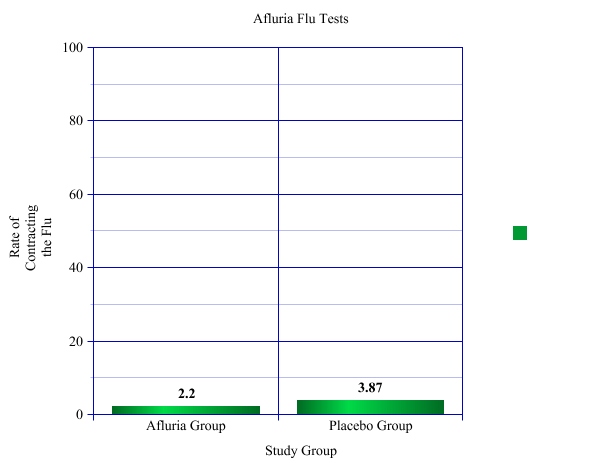 (These were mostly white women with a mean age of 35.5 yrs, just in case you were wondering.)

I mean, I know I’m not a doctor,but that’s not too terribly impressive to me. I guess you have to decide for yourself.

On the other hand, check out what the graphs look like when you compare vitamin D supplementation to a placebo group. This particular study references African Americans, so keep that in mind as without supplementation, African Americans are more likely to be deficient in vitamin D. This study is reported incidences of cold and flu, because no lab tests were offered as this study’s original intent was simply to monitor bone density. Cold and flu were just extra information gathered to consider adverse reactions. This test period also lasted over the course of 3 years. So while it’s a much smaller test group, it’s especially cool because it lasted a long time and it wasn’t about the flu, so there’s less chance of influence factoring in. It should also be noted that once the level of vitamin D supplementation went up to 2000IU from 800IU halfway through the study, the reported incidence of cold or flu was less than 1%. 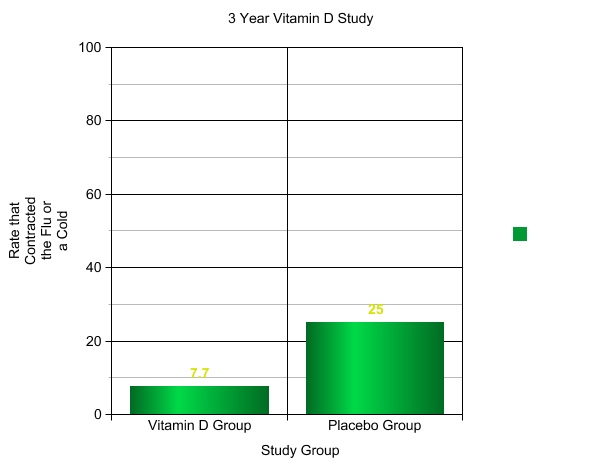 “WARNING: Adverse reactions may include a lessened ability to honestly ‘call in sick’ to work. People who hope to acquire the flu or a cold should seriously consider not taking this dietary supplement.”

So, while I can’t say that taking vitamin D can be used as a preventative for the flu in place of the vaccine, because the FDA frowns on that kind of thing, I’m considering complaining to the FDA that my bottle of vitamin D3 doesn’t have all of its adverse reactions listed on it. That’s highly irresponsible.

*In 2006, Dr. Cannell’s article, “Epidemic Influenza and Vitamin D” was published in the journal, Epidemiology and Infection. The article, co-written by some of the world’s top vitamin D experts, presented a revolutionary new theory on vitamin D’s link to the flu. This quote was taken from an interview with Dr. Passwater from WholeFood’s Magazine in 2011.

Disclaimer: I’m not a medical doctor, or any doctor, so this is not to be considered medical advice. The FDA has approved no statements encouraging the use of vitamin D to support resistance to influenza in any way. The FDA & CDC recommends almost everyone get an annual flu shot.

Photo credits: We made the graphs ourselves. Feel free to use them in your own articles, just give credit to everythingbirth.com.