My daughter just yelled from the kitchen, “Oh no! What have I done now!?” So, I walked in there, ready to observe the new disaster. Last time, it was cracking a dozen eggs onto the ground and then smearing it all over her skin, which warranted Benadryl for a day given the egg allergy she suffers from.

Oh, I know, you’re thinking that I should get a baby lock for my fridge right? Well, she figured out how to pick it when she was merely one year old. So, we raised the child lock higher, to the freezer door. Then, we bungee corded the fridge and freezer doors together. That just taught her  how to push chairs across the room to be able to reach the higher lock. So, we started tying the chairs to the kitchen table’s legs. That taught her how to untie knots.  So, we had a system of knots and strings, which she turned into a playground. Once I saw the inevitable danger there, I tied the chairs to the table legs in such a way so that there was no space through which she could shove her apparently mouse-like squeezable head.  So, she just built up her muscles until she could pull the entire table and all four chairs across the room. So, I gave up. I removed the bungee and the child lock. I untied the chairs.

I started telling her, “No,” more firmly. I soon learned this translates into toddler as, “Be quieter about it next time so mom won’t catch you.” So, she learned about consequences. That taught her to make sure it was worth it. Once she found herself unable to control the fridge curiosity impulses and realized that there was no turning back, she was sure to touch every SINGLE thing she wasn’t supposed to.

Now, she’s three and she helps me cook. The fridge curiosity is less compelling. But every so often…

My daughter just yelled from the kitchen, “Oh no! What have I done now!?”

She found the five dollar box of unopened organic raspberries that were supposed to be for my salads. No one else likes raspberries but me. She hates them. Though, apparently she loves opening the box up, dumping it on the floor and making raspberry jam silently while she makes voices like she is playing with dolls. Oh yes. She is that clever. She has this stretchy guy that she calls a prince and a Barbie that she says is his princess girlfriend. And they dance together. So, she sat in the kitchen buying herself time, while I cleaned the bathroom, making me THINK she was playing innocently with her dolls, making them have a conversation, but all the while she was making raspberry jam on my kitchen floor.

I didn’t know what to do. So, I told her I was very sad because they were my raspberrries for my salads and now I couldn’t have them. I told her I was just going to have to just give them to the birds. She was sad until she heard the part about the birds, and then offered somberly to do it for me. It seemed like she was going to take responsibility for her actions, so I let her take them all outside.

It seemed like I handled everything right, until my little girl ran back over to the fridge and said, “Let’s go see what else we can feed the birds!” Then, I realized I was in way over my head with this little ginger child and tried to figure out ways to shove her back into my womb until she turned thirty. Truth be told though, she wasn’t very considerate of me when she was in there either. 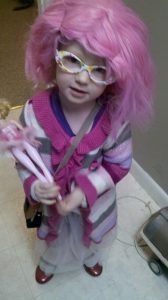