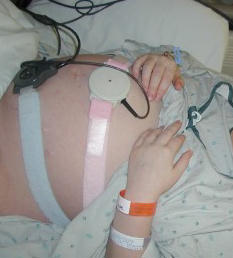 I came across an article in Science & Sensibility that posed the question “How Long Can Labor Safely Be?”  The author, Henci Goer, discussed three sets of data that compared labor duration and outcomes. The perspective might shed a new light on the practice of medical intervention in situations where labor “fails to progress.”

Two sources compiled data gathered about labors assisted by midwives. The third source was date from the  U.S. Consortium on Safe Labor (CSL). The CLS is a collection of 19 hospitals whose primary purpose is “to describe contemporary labor progression and to evaluate the timing of Cesarean delivery in women with labor protraction and arrest.”

All three groups involved spontaneous labor with a full term baby that was head down. Henci explained that since first time mothers usually have longer labors, the data that was used was based on first time mothers. Henci Goer wrote:

As you can see, labor averaged even longer in the physiologic groups without doing any harm to the newborns. As you can also see, the midwifery data blow active management concepts, now enshrined in partograms, out of the water. Setting 1 cm per hour as the threshold for abnormally slow progress—which allows 6 hours to go from 4 cm to 10—means augmenting first-time mothers dilating faster than the average rate!

In the two data sets where there was no intervention, there were no incidences of epidural,  oxytocin augmentation, or birth instruments used to assist delivery. None of the women in either of the natural labor data sets required a cesarean section.

The CSL labors involved a 60% epidural rate. The CLS used oxytocin to augment labor 37% of the time. 10 percent of the deliveries involved birthing instruments being used and 16% of all the deliveries resulted in a cesarean section.

Perhaps more importantly though, the CLS group of babies had five minute apgar scores of of less than 7 more frequently than the other two natural birthing groups.

So, What’s the Rush?

If deliveries are allowed to progress on their own, instead of by a time table that a large portion of women could not possibly labor in accordance with, what gives? The hospital where I delivered had schedules and it was so stressful. I was explained that they would like to see me progress 1 cm per hour at least.  If a woman progresses more slowly than that, many doctors will start the meds to speed up labor.  Well, as we all know, at least from discussing with each other, those labor accelerating drugs make labor hurt so much worse. That’s when we often accept their offer for an epidural. Well, you know the story from there.

This whole time though, I thought that the people who made these rules were genuinely concerned about labor taking too long because of their perceived risks to the baby. I have to believe that’s usually the case, but listen to this…

The CSL investigators, according to Henci, wrote that the extra two hours of average labor duration in first-time mothers (compared to cohorts from the 1960s) cost Intermountain Healthcare hospitals an extra $110.40 per labor. Grand total, Henci explained, that amounted to an annual excess cost of $600,466. The CSL investigators went on to say, “The implications for healthcare systems and payors are obvious and should drive a reconsideration of modern-day labor process management with an eye towards process improvement.”

So, it saves a lot of money to shave time off a labor. Then, if the labor doesn’t speed up or if the process stresses the baby out and the baby won’t come out vaginally, Cesarean Sections  are always on standby, with an almost $8000 price tag.