There’s been a bunch of discussion online recently about whether or not we should wear our babies forward-facing. The two biggest arguments against forward-facing baby wearing are that it creates over stimulation of the baby’s senses and that it encourages improper hip positioning.

Issues have been brought up such as having a baby forward facing might create too much stimuli for a baby. Indeed, it could. Yet, as a contrary point, I should mention that little ones often turn their heads to the side when being carried while facing in to watch the busy world pass by. They are curious about the world, more so than even their mamas. It’s a valid point that we don’t want to force stimulation on our littlest ones, but I don’t think that this is the best reason to refrain from forward-facing baby wearing in a baby carrier.

A strong argument that has been brought up is that forward-facing baby wearing doesn’t allow a baby’s hips and legs to grow properly . This reason is strongly supported by the International Hip Dysplasia Institute who says, ““If the hips are forced into a stretched-out position too early, the ball is at risk of permanently deforming the edges of the cup-shaped socket (hip dysplasia) or gradually slipping out of the socket altogether (hip dislocation). Hip dysplasia or dislocation in babies is not painful so this may go undetected until walking age and may also result in painful arthritis during adulthood.” The hips get stretched out when the legs are not separated.  Fantastic diagrams can be found about proper positioning of a baby’s legs here. Even my favorite baby carrier the Moby Wrap won’t “splay” the hips correctly if worn using a forward-facing position. Even still, with so much science to back up the fact that forward-facing, leg-dangling baby wearing is bad for the baby, that’s not the strongest argument either. Maybe as a scientist, specialist or chiropractor it would be.

Being a Natural Mother

I’m none of those things though. I am a mother. I find that instinct is my strongest guidance in the matter. To me, it sincerely does not feel right. Sure, I wore my babies forward facing sometimes, but I would always turn them back in before long because it didn’t feel right. It nagged at me. Perhaps because within me, beneath my social upbringing, beneath my intellect… I am a female primate tending to her young. 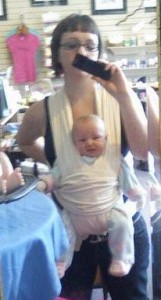 … Just never felt quite right to me.

What do you think? How do you feel about forward-facing baby wearing? I’m certainly no expert on this particular aspect, so I’d love to hear your opinions on the matter.