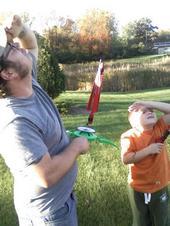 I hate stories like this, when I have to relay to people that children learn certain particular traits  from their fathers.  For example, I remember learning that a father’s relationship with his daughter directly affects how long she will retain her virginity. These stories bum me out because, while I know so many wonderful fathers, I also know a lot of women who are playing both rolls. Of course, I even know some fathers who play both rolls as well. At any rate, I hate learning that particular genders are “responsible” for particular character traits in their children.

At the same time, I find these stories fascinating. So, I apologize if I am the bearer of annoying news, but this is really interesting:

A multiyear study of more than 300 families by psychologists at Brigham Young University in Orem, Utah  looked at father’s parenting styles and the trait of persistence in adolescents.

Researchers found that an “authoritative” style of parenting in fathers was significantly associated with persistence in their adolescent children. Authoritative parenting is the style in which the parents listen to their children, have a close relationship, set appropriate rules, but also grant appropriate freedoms. The odd fact, of this though:

Mothers’ parenting had nothing to do with that particular trait.

“These findings suggest that persistence may be another behavior that is more clearly influenced by fathers than it is by mothers, and indeed, may be one of the mechanisms through which fathers help to protect their children,” researchers wrote in the Journal of Early Adolescence.

The lead researcher explained that this research shows that “First, fathers matter. Second, persistence is an important character trait to teach to our children…. We focus so often on things like genetic intelligence that I think it’s refreshing to be reminded that good old-fashioned ‘sticking with it’ is really important too.”