One great thing about organic produce is that it’s still in its natural state. It isn’t treated with chemicals to speed or reduce growing, prevent budding, or prevent future seed viability. It’s pretty fantastic because eating foods in their natural state feels healthier, but also, it means more for your money.

A while back, I told you about how Ayla liked to break into the fridge and squish my organic berries because she didn’t like them and apparently, as a toddler, thought she was the only human being alive that mattered. In an attempt not to waste them, we threw them and the other berries that followed in a fertile area of soil. This summer, berry patches were growing where there once was none. Of course, not everyone has the room to grow huge berry patches in their yard, there’s still other fun ways to make new life from organic produce.

Though I haven’t tried it myself yet, a friend of mine took a couple of left over budding organic potatoes and cut them into four parts, got them nice and wet and then buried them in a big pot on her porch. As the plant grew up, she added more soil on top. As a result, dozens of potatoes grew from just two lonely organic potatoes that people would normally throw away.

My fun new project with the children has been to grow new celery stalks and lettuce heads from the left over organic produce bottoms. To make this work, you have to re-cut the bottoms of them where they were cut for harvest to open their “veins” back up to drink water. Then, simple “hydroponic” gardening will start them growing again. I heard about this with celery and thought I’d try it with lettuce while I was at it.

Within one day, both types of produce started regrowing. “Buy One Get One Free” has never been so much fun. Take a look at my kitchen counter right now: 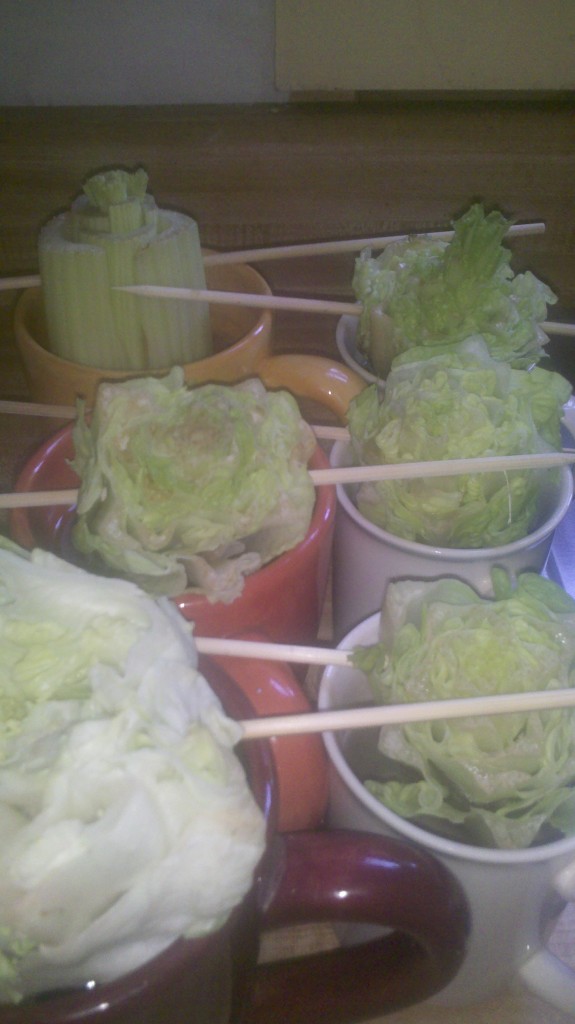 The two cups in the back had produce from yesterday  that had been cut clean across, already regrowing quite quickly. The rest were from earlier today. All they have done was start to heal up where they had been previously cut.