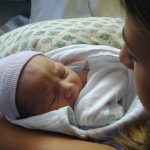 Yesterday, my ten year old son asked me if we could look through his baby albums.  Every baby book has that one picture of the new baby, completely stark-naked, right? (Fingers crossed you just nodded to yourself.) When we got to that one, my son looked at it, then looked a little harder at it. Then he said, “Mom, what happened to my penis? It’s all red!”

I swallowed real hard. (My mom-pride doesn’t go down easy and we all know that I feel I made a mistake when I had my son circumcised.) Took a deep breath and said, “That’s where you were circumcised.”

He asked me what that meant.

I told him, “When you were born, you had a covering on the end of your penis called a foreskin. When you were circumcised, the doctor removed that covering.”

I explained to him that at that time most parents did, because doctors told us that we should. I told him they said it would prevent infection.

My ten year old said, “It would seem like cutting my penis could give me an infection. Plus, look at my face, I looked like I was in pain. It probably still hurt then, Mom.”

I said nothing, just listened.

Then he said, “Also, mom, I bet if that skin was there, it wouldn’t hurt sometimes when it rubbed against my underwear. I bet that was supposed to protect it.”

I had this talk all planned out in my head, but in my mind, he was going to be older. There was more I was going to be able to say. More explaining I could do for myself. More intactivism I could spout about “When you know better, you do better!” that would make everything fine. In my mind, he was old enough that I could say, “Well, your dad was pretty determined,” and it wouldn’t matter because he was going to be mature enough to handle the fact that his dad and I argued about it. I couldn’t take it to that level with an ten year old though. I had absolutely no excuses that would work…

Because at ten years old, the counter arguments he used (when he wrongly assumed I thought I did the right thing) happen to be right. I wondered to myself, “It it really so obvious that even an eleven year old could see the value of being left intact and I was able to be talked into circumcising my newborn son?”

All I could say was, “Actually you’re right, Noah. I was wrong. I’m sorry. If I could take back the choice we made, I would. But I can’t.”

I can’t take back a choice that probably never should have been mine to make.

(Edit: When I first wrote this article, I wrote it saying he was eleven, because his birthday is like RIGHT NOW. But then, for the sake of being very technical, I went back and changed it to ten. Then changed it to eleven thinking I shouldn’t give the impression that he’s younger than he is. Then, I changed it back to ten because of being a stickler for technicalities. Only I missed an eleven at the very end. I hope that explains why it looks like I don’t know exactly how old he is. At any rate… Happy birthday to my son!)