I have spent the last month, since we moved into our new home, trying to catch up somehow with my delayed planting.  I started way late in the season, but that was through no fault of my own. Moving during the summer puts a damper on the seasonal harvest.  The only reason that I’m even attempting is because I’m holding on to hope that Michigan will see a late frost again this year and I can enjoy a bountiful harvest two months after everyone else. I know it’s a long shot, but I had to at least try.

So, there I was weeding endlessly, when I decided I had to know what the weed was that kept invading my family’s food supply: 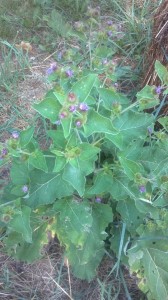 That thing is Burdock. And to most Americans, it’s annoying because of its burs. But as I learned more about it, I discovered that it’s also edible. Like super edible. First year plants are the most edible and apparently, my burdock would have been even tastier if I had eaten it during the spring. Apparently its roots are even considered a delicacy in Asia and is great in stir-fry. The roots can even be boiled or baked and have a hearty taste kind of like a potato. The flower stalks/ shoots taste like artichoke hearts and can be used as a substitute in recipes.  It even has medicinal value, but I don’t know nearly enough about it yet to even think about drying it or making any extracts from it.

After learning all of this, I got kind of excited and started asking my landscaping and horticulture friends about the other plants in my yard. Just today I ate wild asparagus and learned that just like in the stores, the big ones are nasty and the young ones are tasty.

I also found that I have sumac, which has really cool “berries” that can be made into a wonderful lemonade-style drink. We tried that right away and it was great.

Look how pretty this is: 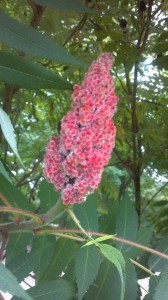 I also have an abundance of  lambsquarters, and yellow wood sorrel, dandelion leaves,  and berries which were all used in this salad I made myself the other day. With all of the flavor those ingredients offered plus a couple of garden regulars, I didn’t even need dressing. I didn’t buy anything in this awesome salad.: 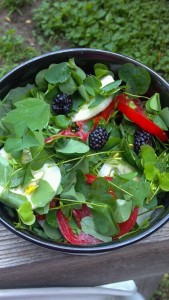 Now, I am brand new at this, so I researched everything I was about to eat first. Not just to be sure I could identify the plant, but also to make absolutely certain that there were no poisonous look-alikes. Consistently, while reading, I was warned, “If you aren’t absolutely certain that the plant you have has no poisonous look-alikes, do not harvest it for food.”

Take wild carrot for example, AKA Queen Anne’s Lace… You can eat the root of that, but it looks startlingly like Hemlock. Yeah, that super poisonous plant that old was used to kill Socrates.  I tried to find an exact way to tell them apart.  Like, Hemlock supposedly has purple spots on the stem and Queen Anne’s Lace supposedly has hair on the stem, but in my yard, I found  a plant that has both. I learned of other identifiers too, but I don’t even want to write them down because the idea of getting them confused is just too scary to me.

See, look at this: 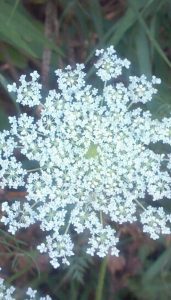 I still can’t figure out which this is. I sincerely suspect it is not dangerous, but then, where is the little dark center? At any rate, from the sounds of it, even people who forage professionally just say to avoid this entire mess and simply consider Queen Anne’s Lace and its wildly-carrotness toxic. Even if it isn’t. I mean who wants to make THAT mistake?  It’s not like it’s only a little poisonous and would make you sick. It’s LETHAL. That kind of makes me want to tear them out of my yard completely.

The point is, there’s a lot of plants that look like plants that are super toxic, so I don’t plant on eating even the edible ones if they even resemble anything that is toxic.  It’s not worth the risk.

As I replanted lettuce seeds because the birds ate the other lettuce seeds, I couldn’t help but realize how much better Nature is at tending to her garden than me. Why would I want to work hard for lettuce when I could eat more of the shamrock looking wood sorrel, with zero effort? I can’t wait to find out what other kinds of “produce” is growing in my backyard.

I used to think that foragers ate sticks and stuff and had virtually no taste buds, but the stuff I have foraged from my yard is as tasty as any plant I could grow in my garden.  Well, with the exception of watermelon of course. Watermelon is the bomb.

Plus, I figured out a way less messy way to get to the good stuff: 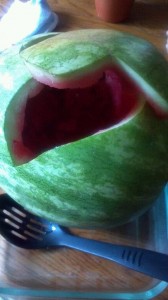