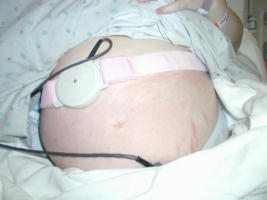 Well, if you have, you might want to think again.

This summer, Huffington Post reported about a study that doctors like Dr. Judy Aschner, a pediatrics professor and neonatology director at Vanderbilt University Medical Center, believe, “Will cause quite a stir.” The study involved 128,000 New York City public school children and looked at academic achievement of children born at that critical “full term” mark of 37 weeks compared to children who spent more time in the womb. The results: more kids born at 37 or 38 weeks eventually did poorly at school than did kids born even a week or two later.

The researchers felt that the difference was enough that the cutoff point for “full term” should be reconsidered.

It wouldn’t be as noteworthy if some children just were born early, but as researchers point out, women regularly schedule elective inductions and c-sections with the approval of their doctors for no good medical reason. “I don’t want to panic moms whose babies come at 37 weeks,” Dr. Ascher said. “But those elective early deliveries really need to stop.”

Of course, there’s numerous factors that could also figure in besides just the early birth date of the child. But according to Huffington Post, the researchers took in to account other risk factors including low birth weight, lack of prenatal care, smoking during pregnancy and neighborhood poverty, because all of those things could play a roll. Even after factoring these issues in though, the researchers STILL found that birth at 37 weeks and 38 weeks posed an additional risk all on its own.

It should be noted that midwife assisted births regularly exceed even the standard “40 weeks” gestation that seems to be the magic number for doctors and online due date calculators alike.

So, now I wonder… At 39 and 40 weeks, if invasive techniques are used by OBs at prenatal visits such as cervical exams or membrane stripping, are these children even being born when they normally would? Are they being left in the womb long enough or are they being kind of “pressured” out? If brain functioning is decreased as a child is not left to gestate naturally, is elective induction even ethical? Are an of the invasive obstetric techniques?

If forcing a baby to be born early compromises his full brain potential wouldn’t that violate their oath to “first, do no harm?”

What do you think? If this research is accurate, is it ethical to try to make the baby be born early artificially if there is no valid medical reason to do so?

Read also:  Midwife Assisted Home Births and Why Most People Should Have Them.