I’ll just break the ice right off the bat:

I gave my daughter donated milk for a couple of months when I was unable to nurse my child.

People tell me that’s gross, as they feed their babies milk from a mother of a different species. When you put away societal norms and personal hang-ups, which is actually more gross?

Other Mama’s Milk Through History

The use of a wet nurse, a woman who breastfeeds another’s child, was very common before the introduction of baby formula. The Journal of Perinatal Education published an article entitled “A History of Infant Feeding” in 2009. The authors explain:

” Wet nursing began as early as 2000 BC and extended until the 20th century. Throughout this time period, wet nursing evolved from an alternative of need (2000 BC) to an alternative of choice (950 BC to 1800 AD). It became a well organized profession with contracts and laws designed to regulate its practice. Despite objections during the Middle Ages and the Renaissance, wet nursing continued until the feeding bottle was introduced in the 19th century.”

Though not often talked about, I am familiar with a few sets of women in my own county who have acted as a wet-nurse in situations that called for it. Two sets of milk swappers are sisters. The third, came out of necessity. Two women I know used to babysitting each other’s infants. They were both nursing. One day one of the women was running very later. The woman who was babysitting had run out of the other woman’s pumped breast milk, and the baby was hungry.  After a hesitant phone call, the solution was clear. There were several times after that day, that those women just took the easier route and nursed each other’s babies.

It happens more than anyone every discusses. 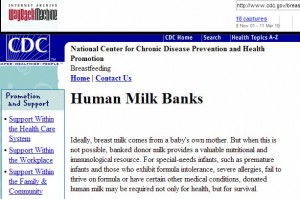 Milk banks are companies that accept breast milk from screened donors. Because there is some small risks of passing infections and viruses to babies through breast milk, donors must undergo a medical screening and a blood test to rule out infectious diseases such as HIV-1 and-2, hepatitis B and C and syphilis. In general though, at most milk banks, the milk is pasteurized in such a way that germs are killed, but most of the critical nutrients in the donated breast milk remain.

The Human Milk Banking of North America explains the process that is used  on their website. Generally, milk banks are not a very affordable option for women looking for human milk to feed their little ones.  In certain circumstances, insurance companies will pay for this milk. It’s still not common, but it is becoming increasingly more common in NICU situations because the science is sound: Breast milk is nutritionally superior and the benefits can be life-saving to at-risk babies.

This is how I got my daughter’s milk. I already knew the women though, so I didn’t have to search for a donor. The women were already screened by a “Milk Bank” by the time they offered their milk to me and found to not have HIV-1 and-2, hepatitis B and C and syphilis. Given the nature of breast milk, I would not have been overly concerned anyway, but it certainly set my relative’s minds at ease. I did not “pasteurize” the milk in any way. I just warmed it as I would my own frozen breast milk. It is highly suggested that women do pasteurize their donated milk, but given the close relationships I had with these women, I chose not to. I wanted the added benefits of not pasteurizing because at that time, both my daughter and I had just been on antibiotics.

There are hundreds of online communities that offer milk sharing. This milk is generally donated and usually, the milk is free. Women generally screen their potential donors. MilkShare has information about screening donors and writing up agreements. Precautions they suggest include:

I know this is a touchy subject, but I wanted to make sure that women knew this was an option. Likewise, I think it’s important for women to know that there are plenty of “normal” women out there who feel, as UNICEF does, that another mother’s milk is the next best thing when breastfeeding does not work out.