The American Thyroid Association recommended that North American women receive dietary supplements containing 150 μg iodine to be taken daily during pregnancy and while breastfeeding, They suggested that all prenatal vitamins contain 150 μg of iodine. Even more than two decades ago, when I was first getting pregnant, the WHO suggested 200 μg of iodine for pregnant women. Thyroid nutrition is especially important during pregnancy or while pregnant because of the greater demands put on the thyroid during this time.

Iodine deficiency affects more than 38% of the world’s population. Even mild iodine deficiency in a pregnant woman is associated with decreases in maternal Serum total thyroxine (T4) which can have adverse effects on a baby’s cognitive functioning. In the last decade, mild maternal  iodine deficiency has even associated with attention-deficit and hyperactivity disorders in babies. Iodine deficiency can lead to depression, weight gain, cancer, high cholesterol and undo stress on organs. The thyroid is an integral part of almost every function of our body needed for proper health.

My Thyroid Was Starving

After I delivered my son, I was devastated that I didn’t lose weight. In fact, I gained weight. That was disappointing because I had already gained weight prior to being pregnant from the Depo Shot. I breastfed, so I assumed I would lose all sorts of weight, but the only aspect of my vanity that was rewarded was the speedy firming up of my lower belly.  My nails were brittle. My hair was nasty. I was exhausted and depressed. I had regular OB visits and doctors visits and as the years went by and I was 60 pounds heavier than I should have been, the only help I got was that I needed to exercise more.  I was given a 1200 calorie a day diet diabetes diet to follow, even though I didn’t have any signs of diabetes and I attempted to starve myself, but the exercise wasn’t going to happen. I was too tired.  I was exhausted by 7PM and wanted to sleep all day. Eventually, I gave up and decided I would just be fat.

Years later, my doctor ordered a blood test as part of an annual examine and included a thyroid functioning on it that would test my T3 levels. After all, there was a significant family history of thyroid disease. When I got my test results back, there was nothing dramatic be to shown.  I was about thirty years old, and by thyroid (T3) was just barely borderline. The paperwork indicated that my thyroid functioning was within normal range and I would not be given medication.

I took that paperwork home and sat on it for a bit longer. Accidentally, I happened upon a sea kelp supplement that was being offered by my co-op. I saw that the daily dose did not exceed the RDA for iodine and that it was naturally occurring iodine which made me feel even safer. I had already known that sea kelp contains iodine (as opposed to the iodide added to table salt) and bromine. What’s so crucial about this is that our thyroids can’t use iodine sufficiently if it’s not in its natural pairing with bromine. In table salt and many other vitamin supplements, bromine is not included.

I promptly began losing weight. A lot of weight. There were no dietary changes and no exercise routines, just sea kelp. It was an astounding transformation: 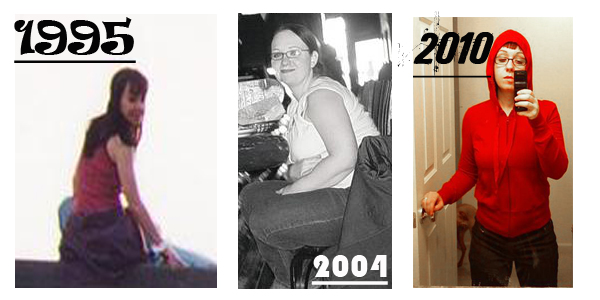 I finally got to a healthy weight. It’s not the best weight ever because I am short, but given my thick bones and oddly large muscles, it’s a healthy weight. I weigh 140 pounds.   I’m sure I could get more weight off by exercising, but as it turns out, I don’t really like to exercise… even when I have the energy to do so 😉

I am not going to begin to tell you I understand all of the functions of a thyroid. I’m not a doctor and even regular doctors don’t seem to have a full understanding. That’s why there are specialists.  So, this may not work for you. After I lost my weight, of course, people asked me what my secret was. Learning that it was a magic little pill and not dedication and lifestyle changes, people in my acquaintance were more than willing to give it a try. Anecdotal results were almost always astounding though. People I knew were losing weight to the same degree as I was. Sometimes though, absolutely nothing happened.

Sometimes a thyroid can be diseased and sometimes weight has nothing to do with improper thyroid functioning. It’s always a good idea to consult with your doctor.  Adequate nutrition though, will always be my first step.

Neither Everything Birth nor this author receive any type of compensation for promoting the particular kind of sea kelp this article linked to. The brand was spotlighted simply and solely because this author had previously tried other more processed brands of sea kelp supplementation which did not work. It is believed by this author that the lack of processing has something to do with its improved efficacy.