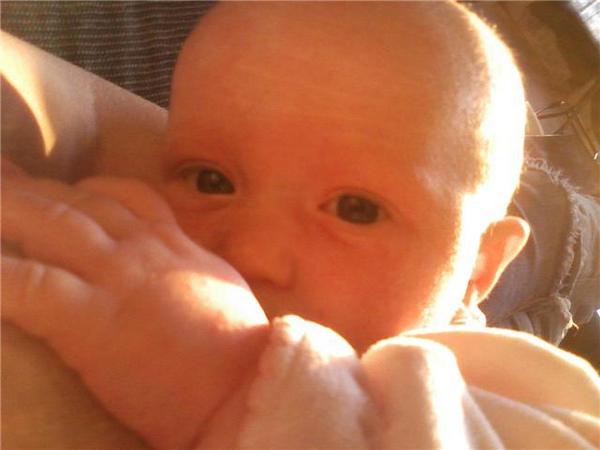 Another round of applause for breast milk, please.

Spanish researchers have revealed that colostrum, the first secretion of the mammary glands, contains over 700 species of microorganisms. Suddenly, my costly 30-strained probiotics seem less than noteworthy.  The findings have been published in the American Journal of Clinical Nutrition.

The authors stated, “We found that the human milk microbiome changes over lactation. Weisella, Leuconostoc, Staphylococcus, Streptococcus, and Lactococcus were predominant in colostrum samples, whereas in 1- and 6-mo milk samples the typical inhabitants of the oral cavity (eg, Veillonella, Leptotrichia, and Prevotella) increased significantly.”  I have to tell you, I don’t remember seeing any of those listed on my $35 bottle of probiotics.

I think it’s very important to note that the researchers said that their results indicate that breast milk bacteria are not contaminants. This is important because it’s a commonly held belief among the milk sharers in our Everything Birth community. What will this mean, if anything, to breast milk banks that use pasteurization to kill “contaminants?” I pondered whether bacteria strains that I’ve come to believe as dangerous could act as nature’s vaccines when found in colostrum.

But it gets even more interesting still.

The type of labor the mother experienced also affected what was found in the breast milk. The breast milk of mothers who underwent a scheduled c-section was not as rich in microorganisms as the breast milk from moms who delivered vaginally. Interestingly though, when a mother’s c-section was not planned and the mother did experience laboring but not a vaginal delivery, the composition of the breast milk was much more like that of a woman who delivered naturally. Researchers believed that it could be that the hormones of labor played a role in flora diversity. Will this impact the way scheduled c-sections play out? Will women be encouraged to labor for some time before their surgery if it’s medically safe for her?

The authors of the article told Science Daily, “If the breast milk bacteria discovered in this study were important for the development of the immune system, its addition to infant formula could decrease the risk of allergies, asthma and autoimmune diseases.”

While, my main point of bringing up this study was to give breast milk the credit that it’s due and encourage women on the fence to breastfeed, I support efforts to make formula as similar to the natural standard as possible. I am a huge advocate of breast milk, but with my third child, I ended up on the formula side of infant feeding when I was prescribed strong antibiotics for an infection.  Though I hope that if formula companies finally create an infant formula that includes all of mama’s milk’s helpful bacteria in it, I hope it’s not as costly as my bottle of probiotics was.

With a new round of applause being given to breast milk every couple of months based on new discoveries, I hope we realize that whatever formula is developed from this new knowledge, chances are breast milk will still contain many more hidden treasures.