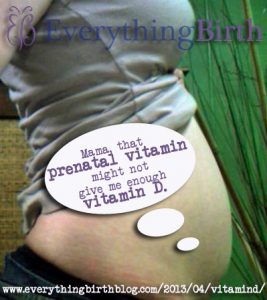 Pregnant? Think your vitamin D levels are fine? It wouldn’t hurt to get a blood test…

Dr. Joyce Lee and a team of researchers at the University of Michigan studied 40 pregnant women. The majority of them were taking their prenatal vitamins.  One would assume they would have all their major nutritional needs addressed right? Of those 40 women, only two of them had optimal blood levels of greater than 50ng/mL. 37 out of the forty woman had levels below 40 ng/mL and the majority of all of the women had significantly low levels that were below 20 ng/mL. More than a quarter of the women in the study had frightening vitamin D levels that were below 10 ng/mL!!!

40 women isn’t that many though, so we could dismiss it. Maybe it was winter in Michigan. But Dr. Lisa Bodnar and her team at the University of Pittsburg had a study group of 400 pregnant women. Granted, Pennsylvania is still fairly north and vitamin D is naturally obtained from the sun, but 63% of those 400 women had levels below 30 ng/mL! Prenatal vitamins did almost nothing to protect those women either.

It’s important to consider that prenatal vitamins are sorely lacking in adequate amounts of the right kind of vitamin D.

When a woman’s levels are too low, she risks:

That’s just pregnancy risks. The risks to a child born of a mother who was deficient are enormous. A complete breakdown can be found at www.vitamindcouncil.org.

Click here to read more posts from Everything Birth about the importance of Vitamin D.