Potential Trigger Warning: Though it is from a clinical stance, this post will discuss the topic of stillbirth. 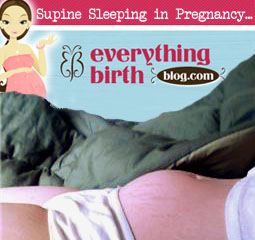 A research team led by a University of Michigan researcher feels that it should be more than a mere suggestion. It seems that avoiding uterine compression on the vena cava may be even more important than we thought.

The research team’s study, which was published last month in International Journal of Gynecology and Obstetrics, says that there is a good possibility that supine sleeping (sleeping on your back) plays a roll in low birth weight, reduced blood flow, reduced cardiac output, and risks for stillbirth.

Louise O’Brien, Ph.D., M.S., an associate professor and co-author of the paper  told Science Daily, “The data in this study suggests that more than one-quarter of stillbirths might be avoided by altering maternal sleep position.”

According to Scientific American, “About one in every 160 pregnancies in the U.S. ends in a stillbirth, which adds up to about 26,000 each year nationwide.”  At close to one half of a percent, those aren’t high odds at all of course, and plenty of those are caused by genetic defects or other issues. But if O’Brien’s team is correct, it could be possible to lower that rate even more to potentially 1 in 640 instead!  That’s more like one fifth of one percent… And I think those odds might make all pregnant women sleep a little more soundly. 😉

P.S. As a side note,  if this position reduces uterine blood flow to this degree, consider the implications of women birthing in this position and the reduced uterine strength?