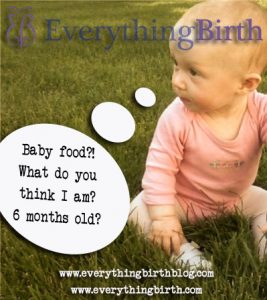 In my life, I know some phenomenal mothers. The majority of the moms I know, however, started their infants on baby food alarmingly too soon. These wonderful mamas in my life are not alone though.

Despite the AAP recommendation that parents and caregivers wait until six months to even begin introducing baby food, many pediatricians are saying it’s OK to go ahead and start much earlier. See, the women I knew didn’t just throw all caution to the wind when they started feeding their four and five month old babies baby food; their doctors actually approved it.

Last month, NBC wrote a post about this topic after an article was published in Pediatrics addressing some worrisome statistics. The CDC surveyed 1,334 new moms.  93 percent of those mothers had started introducing solid foods before their babies were 6 months old. That doesn’t surprise me, because while I waited until after six months, one of the pediatricians said I could start when my child was five months old.

From there, 40 percent of the moms that the CDC surveyed said that they offered solid food before their children were four months old. I’m unsure of if this was by way of a bottle or not, but either way, babies are not supposed to be getting baby food that early. Breast milk is the only thing babies need. If breast milk is not available, of course, it would be exclusively formula that should be given to the infant before six months of age.

This is important for normal digestion and healthy elimination. But we also have to remember that a baby’s gut flora can be disturbed if food other than breast milk is introduced too early. A baby’s immune system is absolutely dependent on a healthy gut.

Many moms say that their baby would just nurse “all the time” if they didn’t give baby food. This might be true, but if it is, it’s because that’s what the baby needs. I know it can be unrealistically difficult to nurse a baby on demand without the baby food to help fill the tummy, but in all sincerity and with the utmost compassion: They are only tiny for a short time, and holding off on the baby food will be much better in the long run.

Note: There are times when a pediatrician will suggest  baby food be mixed in with a bottle to help with reflux. This post is no substitute for medical advice, but I did want to share that many women have found that carrying their infants in a Moby or other wrap drastically helps with reflux issues even without baby cereal. This past post helps explains why that is. If you click through to that past post, you will understand why if you and your baby are struggling with spit up and throw up, near-constant baby wearing for a week or two might be worth a try.