To be an informed parent, we have to do our own research.  I’ve gone through a process from trusting the information handed to me by professionals to learning to do my own research. It didn’t hurt that I learned in college where to find the information and how to decipher data sets and understand statistics. Not every parent has that luxury, and it makes giving informed consent difficult.

Doctors are supposed to acquire informed consent from parents before performing procedures on, giving medications to and administering vaccines to our children. In my opinion, we are never fully informed. We are informed only as minimally as possible, in most instances.

To be informed, we must be able to see the big picture.

As I began to educate myself, I quickly learned that data sets can easily be manipulated to show true data, but a false picture.

To demonstrate this, I am using a data set of mortality rates for the United States. The information was acquired from:

Vital Statistics of the United States, U.S. Bureau of the Census

Historical Statistics of the United States, Bureau of the Census

When figuring death rates, deaths are noted per 100,000 people. This gives a more accurate idea of what is happening as a population grows. In this data set, data from 1977 and 1978 could not be acquired and is missing. 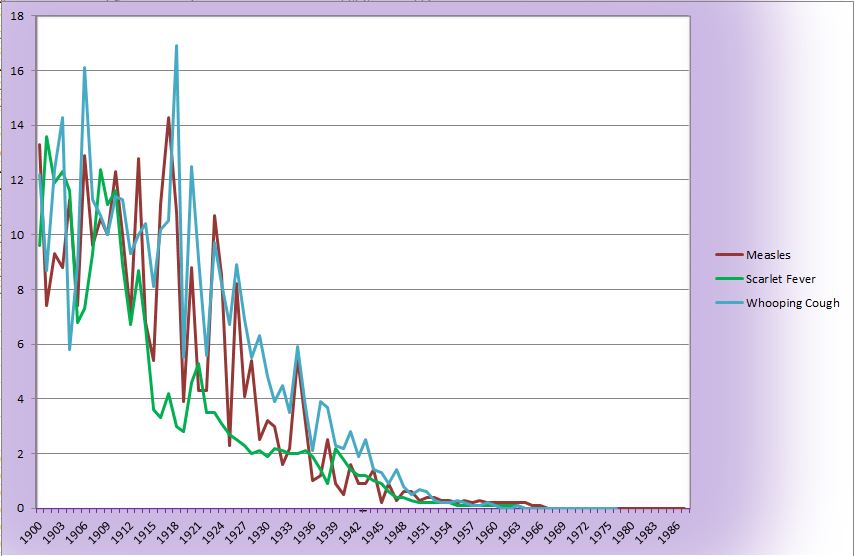 This data set shows two vaccine “preventable diseases diminishing as the century progressed. It also shows Scarlet Fever, which is caused by a Strep infection also diminishing as the century progressed. This is not the presentation we are shown typically by professionals or the media. The graph uses a standard, incremental vertical axis. Notice the space between the lines on the vertical axis grow at a set rate, by 2’s. The vertical axis represents deaths per 100,000 people in the US.

We are often shown a different presentation of this data set: 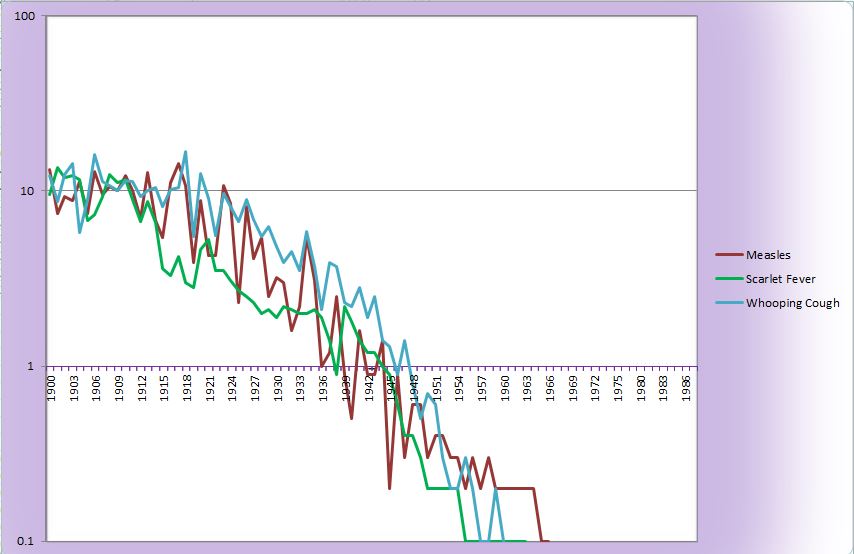 This is a logarithmic scale. The purpose of using this type of scale in graphing is so that as numbers get smaller, on a grand scale, you can see the smaller data more accurately. It certainly works to analyze data, but when presented to the general public without being explained, this style of graph shows a picture that can be misinterpreted. This is the exact same data set, but the graph looks very different.

You need to understand this to have an accurate understanding of the big picture if you are ever presented with a graph like this. 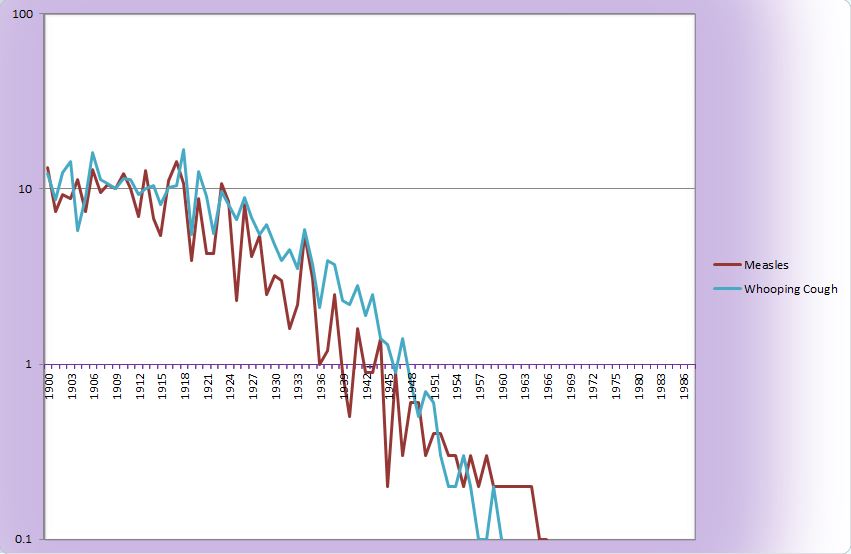 In this logarithmic scaled graph, all we needed to do to take out the possibility that other things affected the death rates of diseases that had vaccines created to prevent them. We do not have a scarlet fever vaccine. Scarlet fever, of course, as shown above, still declined. That could indicate that other factors were also at play. Deleting the scarlet fever data set, completely eliminates that factor from contemplation.

Learning to Consider Other Factors

There are so many factors that go into understanding information well enough to make actual informed consent. Take the historical data from the Flu of 1918 as an example.

You can vastly change the appearance of a graph depending on when you start a graph. When we add in deaths from “Influenza and Pneumonia” you can more adequately see that sometimes, there are significant variances of death rates. 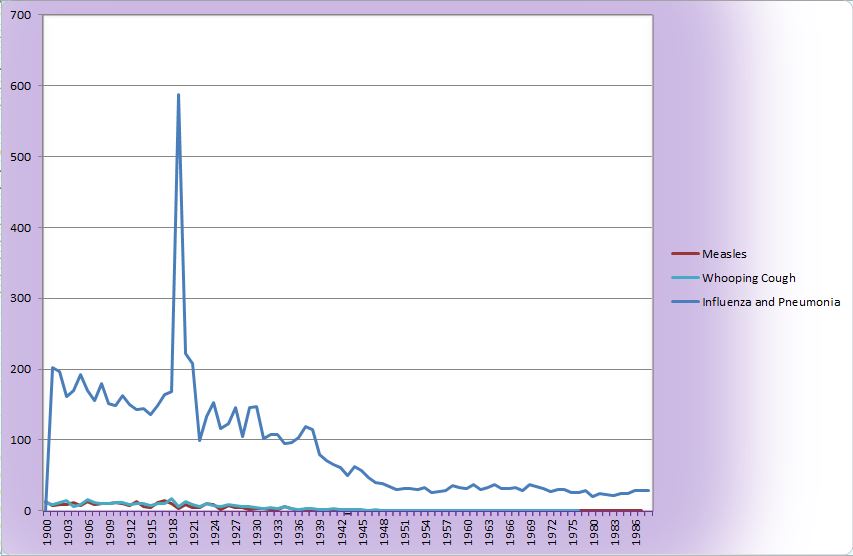 The large spike in influenza and pneumonia was from the Spanish Flu. They tell us that this could happen again at any time. It’s important that we use data wisely. The Spanish Flu didn’t just “spontaneously happen” in 1918. We must also consider what was happening in the world. It wasn’t anything insignificant. 1918 brought the armistice that ended the first world war. Our servicemen were coming home. They were bringing home with them a new strain of flu.  Of course, their resistance was down, given what they were returning from, and many were ill with the new strain.

During the Great World War, another major thing was happening that played a role in the death rates from the flu of 1918. Bayer had been in a legal battle over aspirin. In part a result was that aspirin, which was previously labeled for “aches and pains” was suddenly also being marketed as a fever reducer and aspirin was so novel and exciting that even the US Surgeon General recommended aspirin for treating the fever from a flu just before the spike in flu deaths in 1918.

Of course, now we know that fevers are actually good at stopping viral replication that could otherwise lead to pneumonia, and also that aspirin and the flu simply do not mix.

Another thing to consider is that over the years, causes of death have gotten re-categorized and given subcategories. Now, we can look at death rates and see which deaths were caused by the flu and which were caused by pneumonia or even other bacterial infections. In the past, we could not. We have to consider these factors when making decisions for our children. We cannot allow a graph to be flashed before us, with a horror story and make informed decisions based on such limited information.

This was not meant to be an anti-vaccine post. I do not want to tell you what to do with your children. I do however want to help you realize how limited our informed consent often is. These are our children, we cannot afford to give less than informed consent. We must learn how to look at data from a number of angles and see the bigger picture.