One of the most momentous occurrences in a woman’s journey into motherhood is cutting the cord. In western culture, the physical connection between mother and child is severed just moments after birth. Waiting  a couple of extra minutes before clamping and cutting the cord allows supplemental oxygen and iron-rich blood to reach the newborn from the placenta, just as nature had originally planned.

One in six American babies suffer from iron deficiency. Ola Andersson, a neonatologist and pediatrician, states that this iron deficiency occurs more often among infants whose cords were clamped moments after birth. Andersson’s research has proven that infants who delayed the cutting of their cords for just a few minutes were “90 percent less likely than others to have iron-deficiency anemia when they were four months old.”

Andersson has ascertained that full-term newborns whose cords were left unclamped for three minutes had superior fine motor control at preschool age than those children who were clamped immediately after birth. Some 4-year-old boys also appeared to have further advanced social skills. Male children presented with more benefits than females. Andersson theorizes that this is possibly due to the fact that boys are more likely to become anemic. 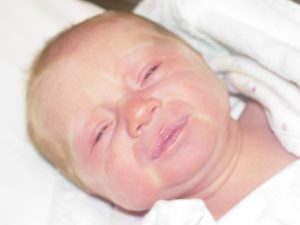 According to an article in USA Today,  the practice of immediate clamping began approximately 70 year ago. During this time, there was apprehension about leaving the infant attached to the placenta. The fear was that leaving the cord attached could take too much blood from the mother.

According to  American College of Obstetricians and Gynecologists (ACOG), The practice of delayed umbilical cord clamping has not been found to be associated with any increased threat of postpartum hemorrhage or blood loss, nor was it linked to a change in postpartum hemoglobin levels or an increase in blood transfusion occurrences.

It was once thought that a newborn baby needed to be held lower than the placenta, but newer studies also show that gravity has no effect on the volume of placental blood transfusion.

During a full-term vaginal delivery, barring any complications, a baby may now be able to rest upon its mother’s chest, covered with a blanket. The rush of hormones Michael spoke of in the aforementioned quote, when combined with skin-to-skin contact, influences several physiological processes. When the cord is cut prior to this bonding time, that entire process is interrupted.

In a majority of births, delayed umbilical cord clamping is possible. Delaying the clamping and cutting of the umbilical  cord, combined with immediate connection between mother and child, ensures that the process of bonding and breastfeeding get off to a good start.  If left uncut, the baby’s umbilical cord will pulsate as the baby’s blood circulates from the placenta back to the baby.

The Importance of Placental Blood Transfusion 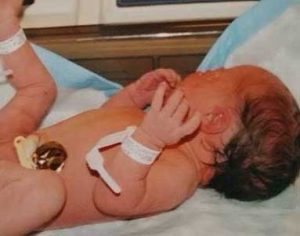 Prior to being born, the baby shares a circulating supply of blood, separate from the mother’s, with his or her placenta. Together, the umbilical cord and placenta provide the baby with nutrients, oxygen, and they clear waste. A considerable amount of the infant’s total blood volume, approximately 30 percent, is held inside of the placenta.

According to the World Health Organization (WHO), “The blood circulating through the placenta and cord is not ‘extra’ blood or waste – it belongs to the baby”. The optimal time to clamp and cut the cord for all babies, despite their fetal weight or gestational age is when the cord stops pulsating.  This transfer of blood, referred to as placental transfusion, is an essential component of every birth.

Placental transfusion supplies the newly born infant with stem cells, red blood cells and immune cells, as well as a sufficient blood volume. Delaying the clamping of the cord allows for the natural completion of the placental transfusion, approximately one third of the baby’s blood supply, which ensures that the baby has safe blood volume  and oxygen levels after birth. For infants who are either compromised or premature, delayed cord clamping may “provide essential life support, restore blood volume, and protect against organ failure, brain injury and death.” 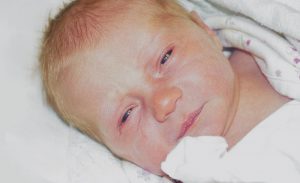 In infants that have undergone delayed cord clamping, there has been a small increase of jaundice incidences which require phototherapy. Obstetric care providers who plan to implement a delayed umbilical cord clamping  procedure should ensure that neonatal jaundice precautions are in place. Given that the benefits to most newborn far outweigh the potential risk, the American College of Obstetricians and Gynecologists (ACOG) is now recommending a clamping delay of at least 30 to 60 seconds post birth. Delayed umbilical cord clamping can simply be performed while other provisions of essential neonatal care are being met (WHO).

According to a spokesperson at the WHO, some healthcare professionals who are caring for a pregnant woman who is HIV positive, or working in an area where HIV birth is common, have expressed concern regarding the delay of umbilical cord clamping. These professionals believe that, during placental separation, a placenta could become exposed to the mother’s HIV positive blood, potentially leading to a micro-transfusion of infected blood to the baby.

The WHO’s  procedure outline states that evidence has shown the benefits of delayed clamping of the umbilical cord, for a minimum of one minute, far outweighs the theoretical, and unproven, fears of spreading the human immunodeficiency virus to the baby.

Precaution procedures, as well as the ability to provide delayed umbilical cord clamping for all babies, may differ between health care institutions. Decisions regarding the birth of a child should be made prior to delivery so that the team caring for the mother and child can be fully prepared to honor the mother’s birthing wishes.

Instead of immediately cutting the cord after the birth of your child, you may wish to ask your practitioner to wait, allowing your baby to receive the “maximum amount of stem cells and oxygenated blood from the placenta.” The number of completed studies and evidence is growing in great strides, proving that the additional blood absorbed at birth will assist your baby with his or her transition from the womb to the world.

About the Guest Author: Jennifer

Jennifer Swarthout is a professional artist, successfully running her own virtual art studio Jagged Edge Acrylics. She has a tremendous love for learning and excels when researching and writing papers. The three tiny humans that she is raising inspire her to be the best possible version of herself. She wakes up every single day and does what she loves. Artist, writer, and mother all rolled into one perfect work day. It doesn’t get any better than that.